“I, I’ve Been Watching You” There’s a podcast I listen to regularly called “Stuck in the 80’s” and occasionally they have a segment called “What’s Your 80’s Obsession?”  It’s just whatever you’ve been listening to, watching, or reading that has some sort of 80’s relevance.  Well, my recent watching of “Purple Rain” on Netflix gave me my current 80’s obsession, and it may not be what you’re thinking… or it might be if the big picture above is any indication.

I recently watched “Purple Rain” in its’ beautiful purple majestic entirety on Netflix for the first time since the 80’s.  Arguably Prince was hitting his peak as a star with this album and film, and I was anxious to go back and re-watch a film I hadn’t seen in ages.  The album speaks for itself.  For many of us 80’s kids that loved a little soul or R&B or funk, “Purple Rain” was one of the defining albums of our generation.  But, what about the movie?  Was the acting by Prince really any good?  Did the bandmates have a lot of lines?  What about the co-stars Apollonia and Morris Day?  Was Prince’s family plot-line believable and cohesive?  Were his musical performances as good as I remembered?  So many questions abounded, and I’ll let you watch it and decide for yourself.

But also, what did the critics back in the day have to say at the time?  Well if you grew up in the 80’s, then you knew that there were truly only two opinions on movies that mattered – Siskel and Ebert.  Thumbs up.  Thumbs down.

Gene Siskel and Roger Ebert were on network tv from 1982-1986 with a show called “At the Movies.”  They reviewed the latest movie releases, and I wanted to hear what they had to say every week.  The two were film critics from competing newspapers in Chicago, and will forever be linked especially since a lot of people could never remember which was which (myself included).  Gene Siskel (who passed away in 1999) was the slimmer, taller, balder of the two and was film critic for “The Chicago Tribune.”  Roger Ebert (who passed away in 2013) was the larger, glasses-wearing, head-full-of -hair film critic for “The Chicago Sun-Times.”  The two of them would lay judgement every week on films with their signature thumbs up or thumbs down review.

Here are Siskel and Ebert reviewing the best of 1984 which including their glowing approval of Prince’s debut, “Purple Rain.”

In Siskel and Ebert’s review above, there is no mention of my current 80’s obsession – Morris Day and the Time.  My cousin in North Carolina recently texted me a picture of his turn table setup that he’s been perfecting while in isolation with his girlfriend during this pandemic.  He has an eclectic reading and listening gene somewhere within him.  He may be quoting Charles Bukowski one minute and then the next sending me a text with the picture below featuring the vinyl album of The Time’s self-titled debut album from 1981.

Morris Day and The Time was a group created by Prince as part of his contract with Time Warner, and I found myself captivated by the scenes featuring Day and his sidekick, Jerome, throughout the movie.  Anyone remember their take on the old Abbott and Costello routine “Who’s on First?”  Morris and Jerome change it to “What’s the password?”

Day’s character was constantly trying to out-perform “The Kid” (Prince’s character name in the movie).

Day to Prince before Day takes the stage:  “Why don’t you stay awhile, see how it’s done?”

Day had a wonderfully flamboyant wardrobe.  His vanity.  His narcissism.  His perfectly coiffed hair, trimmed mustache, and wandering eyes.  His pursuit of Prince’s love interest Apollonia (“Oh, Lord… Either somebody put something in my drink, or you’re the finest motherfucker I’ve seen in ages!“), and his creation and managing of Apollonia and the girl group – Vanity 6 during the movie (Vanity 6 was in real life another one of Prince’s groups that he created).

After watching “Purple Rain,” I texted my cousin, and rhetorically asked how Morris never garnered any Oscar buzz for his self-absorbed portrayal of himself!

Original members of The Time included super-producers Jimmy Jam (keyboards) and Terry Lewis (bass).  Recognize those guys?  You should if you like any music from Janet Jackson or a little group called New Edition.  The band also included drummer and producer/songwriter Jellybean Johnson as well as Prince’s longtime friend from his childhood – lead singer Morris Day.  Prince also recruited promoter Jerome Benton from another band.  Despite the enormous talent that comprised this band, Prince played all of the instruments on their debut album and credited the production of the album to his alter-ego “Jamie Starr.”

Arguably the most successful of Prince’s creations, The Time is best known for three hits – “Jungle Love,” “The Bird,” and “Jerk Out.”  The latter of those three was on a cd (1990’s “Pandemonium”) my roommate Joe Moe owned our sophomore year at St. Gregory’s College in Shawnee, Oklahoma.  I remember singing “Jerk Out” around the dorm room and also was introduced to the funny “Donald Trump – Black Version.”  In fact, here’s a very short clip showing off my Morris Day laugh while listening to “Jerk Out” circa 1990.

So the past few days I’ve had Morris Day and the Time on my speakers soaking in the cleverness of the Prince creation.  Rumors of fighting between The Time and Prince seemed to be the cause of the initial split back in the 80’s but The Time has reunited several times throughout the years for shows and tours.  And ironically, Morris Day and The Time will be one of the bands performing on “The 80’s Cruise” in 2021 (which the guys at “Stuck in the 80’s” promote and also attend along with original MTV VJ’s Mark Goodman, Nina Blackwood, and Alan Hunter).  Of course the cruise is assuming, you know, there are any actual cruises anymore after this pandemic.

“Come on baby, where’s your guts?  You wanna make love or what?” 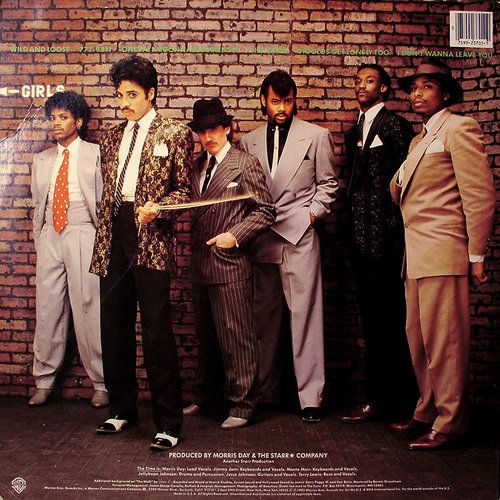 One of the iconic lines in 80’s music lore I would argue, and a line from their most memorable song – “Jungle Love.”  The song only peaked at #20 on the Billboard Hot 100 – a travesty in my book especially when you consider that their 1990 hit “Jerk Out” (while still a solid single) made it all the way to #9.  I’m not sure what held “Jungle Love” back so much in 1985 but their were some bonafide heavyweights in front of it that week in 1985 featuring songs by George Michael, Billy Ocean, Phil Collins, Foreigner, Hall & Oates, REO Speedwagon, and The Pointer Sisters just to name a few.  Nineteen eighty-five was one of the best years for 80’s music in my opinion.

Regardless of its’ lack of more success on the charts, here is one of the more underrated 80’s songs, and really another example of the brilliance of Prince.  Check it out, oh we oh we oh…