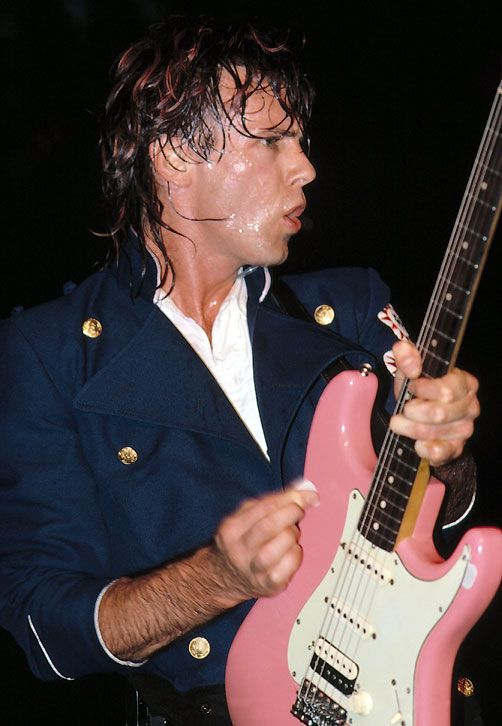 I moved to the “big city” in the summer of 1984.  The city was Norman, Oklahoma.  That same summer before my first school year in Norman (8th grade; shout out Whittier Middle School), I attended my first concert.  The concert was held at the local basketball venue for the University of Oklahoma Sooners – the Lloyd Noble Center, and the concert featured Australian Richard Springthorpe, better known as Rick Springfield.

“Now who’s this, don juan I’ve been hearing of?”

If we want to be technical, my first real concert was Wayne Newton only because my parents dragged me there.  But on Sunday, August 19, 1984, I was there of my own volition, because I loved Rick Springfield, and his career was blowing up.  I realize that maybe it wasn’t cool if you were a guy to love Rick Springfield.  Arguably, there were probably way more girls that loved Rick, but I didn’t care.  I thought he was cool as hell (still do), and he has some wonderfully catchy choruses.

“And every man’s an actor, every girl is pretty”

He had been a star on television (“General Hospital,” and guest appearances on “Battlestar Galactica,” “The Six Million Dollar Man,” and “The Rockford Files” (with Norman native and star James Garner).  Springfield had already charted numerous times on the Billboard Hot 100 (“Love Somebody would be his 10th top 40 hit in the U.S. in the 80’s), had won a Grammy for “Jessie’s Girl” in 1981, and was just coming off of a big screen starring role in “Hard to Hold.”

The movie was released in April of 1984 and the album came out in July.  The movie was not critically acclaimed and garnered just over $11 million at the box office, but the soundtrack did spin off the top five hit (and my personal favorite of his) “Love Somebody.”  It’s said that when Springfield initially read the script, that he threw it across the room calling it a “piece of crap,” but when they gave him a lot of money, he changed his mind and said “I can make this work!”  A moment that he now recalls where he let his ego lead the way.

Nineteen eighty-four was a transitional year for me.  After spending the previous four years in Seminole, Oklahoma, my dad was hired as an assistant men’s basketball coach at the University of Oklahoma.  We were moving to the big time, but it was scary for an insecure, introverted 13 year-old.

At Seminole, the Trojans had won four straight state of Oklahoma junior college championships (every year we lived there), and during this time I had built a core group of friends that I still connect with today mostly via Facebook.  Brandon, Tim, Bill, Nate, and Darby were my Northwood Elementary school buds during those pre-teen years and we spent many an hour together on the playgrounds, baseball and soccer fields, and basketball courts.  We spent time over at each others’ houses playing video games, trading baseball and football cards and celebrating birthdays.  They were going to be my classmates and friends forever so it seemed.

“Love hurts when only one’s in love.”

But then on April 27, 1984, everything changed.  My dad was hired away from the comfort of small town Seminole, Oklahoma, and we were moving to Norman.  Times were changing.  My old crew would be left behind.  New friends, new schools, new teammates, and new adventures awaited me in Norman, but my Seminole crew and I had one last fling before going our separate ways in August of 1984 – Rick Springfield.

I wish I had a cool picture or a t-shirt from the concert, but the fact was that most of us  never paid the $13.75 to see Rick Springfield on that Sunday evening.  Apparently, Nate tells me that he and Darby did end up with tickets somewhere on or close to the floor and Darby actually bought a Corey Hart t-shirt (Hart, whose most well known song is “Sunglasses at Night” opened up for Springfield on many of the near 100 shows Rick performed from August through November in 1984).

So with temperatures hovering around 100 outside that day, my mom took the rest of us and we sat in the video production booth at the top of the arena because we had my dad’s key to enter into the stairway that led up to the basketball coaches’ offices.  It also connected to the video production booth so we could slip in there without anyone paying and watch whatever show was going on below.  Pretty sure we also had a pair of binoculars to help with the viewing that evening since we sat so far away.

I saw Rick in concert that August evening in 1984.  He entered on some sort of futuristic vehicle with fog machines fogging.  Wearing a headset microphone (that was very futuristic looking at the time), he produced to whip the sold out crowd into a frenzy playing his hits that night.   I would see Rick again playing some 15 years later outside in a parking lot in downtown Oklahoma City where my wife and I would take our niece Destinee to her first rock concert.  I would catch Rick again with my wife and a friend of hers in the Fayetteville (AR) mall parking lot at the temporary Arkansas Music Pavillion (the AMP) in 2011.  My wife and her friend Cheryl even barged their way next to Rick as he performed “Human Touch” while walking through the crowd on top of the plastic chairs.  I think they got to touch his bare arms that night (gasp!) while he walked on top of those flimsy chairs.  I even bought and read his book “Late, Late at Night,” which discusses Rick’s story, and all of his successes but also doesn’t shy away from Rick’s problems with depression and suicidal thoughts that he’s battled through the years. (One of his memorable stage tricks was to take a bouquet of flowers and strum his guitar with them making for some visual fun.)

Rick Springfield is now 70 years old, which means he was almost 35 that August night so many years ago.  Seventy!  But if you’ve seen any recent footage or caught a performance of his in the last 3-5 years then you know he stays in excellent shape and continues to show off those arms of his wherever he performs, and he also continues to take acting gigs as well.

I looked for a live 1984 performance, and came across this one from around that time.  It is Rick’s #2 hit from his 1982 album “Success Hasn’t Spoiled Me Yet” album.  This song is a staple of his in every setlist, and always a crowd favorite.  Here is a live performance of Rick, his bare arms, his cool hair, a nasty cartwheel at the 4:17 mark, and his song with an important message for the youth, and one of those catchy choruses – “Don’t Talk to Strangers”…