“The Time is Now, the Place is Here.”

“And the whole wide world is filled with cheer.” – Run DMC

Any of you that know me, or even frequent this site on occasion, know not only my love of 80’s music in general, but of my love for 80’s rap and the icons that raised rap/hip-hop into the American consciousness in those suburban middle class white neighborhoods of the 80’s.  In particular it was artists like LL Cool J, The Beastie Boys, Kool Moe Dee, and of course, the trio that started it all for me – Run DMC.  From the moment I heard “Rock Box,” I was hooked on this threesome that I had absolutely nothing in common with except a love of funky beats, cool kicks, and lyrical poetry.

Of course the group from Queens was responsible for implementing that rock sound into many of their early songs like “Rock Box,” “King of Rock,” and ultimately broke through into the mainstream when they collaborated with Aerosmith on “Walk This Way.”  But another reason why they stand out to me is the fact they are the only rap group with a timeless Christmas classic.

You hear it everywhere during December.  I’ve been at a local girls’ basketball tournament the past few days that our bank sponsors in Rogers, Arkansas (shoutout to the Great 8 Classic), and they’ve been blasting this song over the speaker system during timeouts and intermissions, and I’ve loved it.

I’ll also remember the song because it appears in a low production video some college buddies and I shot on my VHS movie camera late one cold 1989 December night (I’m sure infused by various alcoholic drinks) when I was a freshman in college.  One of my friends filmed about five or six of us dancing around in an empty parking lot while singing along with this song that was blasting from his vehicle’s speakers at that time.  The video is still in my possession.  Who knows when it might magically appear again one day.

“Rhymes so loud and prod you hear it.  It’s Christmas time and we got the spirit.”

Sure Kurtis Blow came out with the catchy “Christmas Rappin'” in 1979, but RUN DMC took it to a new level in 1987 coming up with “Christmas in Hollis.”  (Hollis, Queens referring to the NYC neighborhood where Run DMC grew up.)  It was the only original song on the Christmas Album “A Very Special Christmas,” and not something that Run DMC were particularly interested in doing initially (note: they also appeared with another Christmas original song and video called “Christmas Is” for the “A Very Special Christmas 2.”)  They were ultimately convinced to do “Christmas in Hollis,” and when Jam Master Jay heard Clarence Carter’s 1968 “Back Door Santa,” they knew they had the sample they wanted to use for the song. 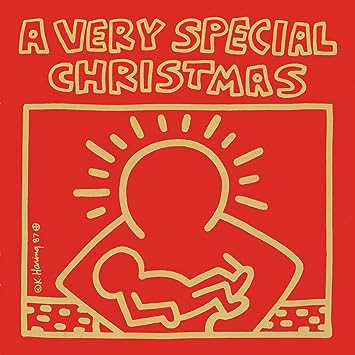 To this day I believe that “A Very Special Christmas” is the only Christmas cd I’ve ever purchased.  The album was the first in a series of Christmas albums produced to benefit the Special Olympics.  It’s actually a pretty good album that features a couple of other holiday favorites of mine including U2’s cover of “Christmas (Baby Please Come Home)”, Bruce Springsteen’s “Merry Christmas Baby,” and The Pretenders “Have Yourself a Merry Little Christmas.”

But for me, the jewel on the album will always be this Run DMC original that even features its’ own music video with a strange elf that only mutters “naughty” or “nice” at various points throughout the video while utilizing a Simon Says machine to help facilitate Santa’s naughty or nice selection process.

“So open your eyes, lend us an ear.  We want to say Merry Christmas and happy new year!”

I still don’t know what collard greens taste like (I thought I would have by now), but featuring a dog as a reindeer, a Santa that carries some serious dough with him, and an appearance by Darryl McDaniel’s mother, here is Run-DMC with “Christmas in Hollis”

Have a safe and wonderful holiday season and take some time out to enjoy where you’re at, and what you’ve been entrusted with including friendships, family, and love.

(Christmas time circa 1987 or 88.  I would have preferred some Adidas gear instead.)

1 Response to “The Time is Now, the Place is Here.”