“I got all my sisters with me.” – Sister Sledge 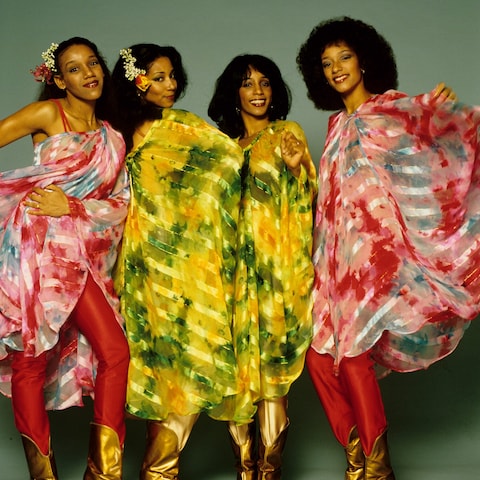 “Family” is just one of those words.  It’s a word with a multitude of definitions.  It’s a fluid word for most people.  The dynamics and the definition of family are ever-changing.  Family can be described in so many ways that it’s useless to even try.  I don’t think there is any such thing as a dysfunctional family.  I don’t think there’s any such thing as a normal family.  Family is just family.  There are no clear cut labels or convenient definitions to accurately describe yours or mine.

“Everyone can see we’re together as we walk on by.  (And) and we fly just like birds of a feather.  I won’t tell no lie.”

June, of course, is the month of reunions and weddings and today my sister-in-law got married.  Robin has been a single mom as long as I’ve known my wife Rebekah (we’ve been married 20 years and dated for a couple of years before that).  Robin has one daughter named Lacy, who’s married and who now has three children of her own.  This week was the first time I’ve met those three children, and the first time I’ve seen Lacy in person in years.

Just so you get the picture, my wife is one of six sisters so you can only imagine the dynamics that exist and have existed within her family.  I’ve watched them all at one time or another through different seasons of life – through children and grandchildren, through loss and sorrow, through financial difficulty and job loss and job promotion and just everyday life stresses.  Each sister is unique in their own way, and I love each of them for different reasons.

“Here’s what we call our golden rule.  Have faith in you and the things you do
You won’t go wrong, oh no.  This is our family jewel.”

My wife and her sister Robin have had, let’s just say, an interesting relationship.  Separated by only 22 months, I’ve seen these two in a full-out shouting match at one another.  About what, I have no recollection of today.  I’ve also seen times where they’ve leaned and loved and supported each other like only sisters can do.  I’ve seen days and weeks and months go by without so much as a text between the two, while at other times they’ve spoken every day like best friends forever.  I imagine their relationship is not unlike a lot of family relationships.  Once again, it’s neither normal nor disfunctional.  They are just two different people with different ideas and thoughts and experiences who love each other, and will always be joined together forever by the same mother and father.

My awesome wife and my cool sister-in-law Robin

Forever.  That’s the beauty and also the inherent sadness of family sometimes.  It’s not always perfect.  It’s not always pretty.  It’s difficult… and it should be.  How will you ever fully appreciate family if you don’t chase the highs and battle the lows.  Feelings get in the way all the time forming the baddest roller coaster of all-time.  And it’s not one that you really ever get off of.  Family will take you through peaks, valleys, and everywhere in between, and you’re not getting off.  Those seat belts lock you down for a reason.

In the end, however you choose to define it, you can’t change who your family is or what’s happened in the past as much as you can control anything that happens in the future.  All you can do is make the best of the present, and try to remember that this family, your family, is the only one you have while you’re inhaling and exhaling and your feet are on this big rock of ours.

“Just let me state for the record.  We’re giving love in a family dose.”

Today’s featured song takes us just slightly out of the 80’s with this late disco era hit by the sister group known as Sister Sledge.  The four siblings formed Sister Sledge in Philly in 1971, and the song reminds me of a simpler time when Rebekah and I were just married.

At our wedding reception in Norman, OK, she had all of her sisters out on the dance floor with her (I think) that evening as this song blared from the speakers.  For a time, there was no division or animosity or hurt feelings or words left unspoken.  It was just a group of sisters, differences set aside, enjoying themselves thanks to the power of music and the pull of family.

Like Loading...
This entry was posted in Uncategorized and tagged disco, family, Sister Sledge, sisters, We Are Family, weddings. Bookmark the permalink.