A happy Easter to you all!  And a happy Easter to my beloved sincerelythe80s.com site that I haven’t posted in much the past few months.  The yearly celebration in the Christian faith of Jesus’ resurrection from the dead seemed like a good time to come in with a post.  There aren’t many 80’s song with Jesus in the lyrics.  Let me re-phrase that – there aren’t many secular Billboard charting singles from the 80’s that mention Jesus in the lyrics, but this one from my Irish brethren fits the bill briefly near the end of this classic 1983 track.

“Wipe the tears from your eyes.  Wipe your tears away.”

Easter features less pageantry than its big brother Christmas, but it makes a more powerful statement than its’ December counterpart.  Yes, it’s one thing to celebrate a virgin birth but quite another to honor a day representing the resurrection of a man whose feet walked this earth some 2000 years ago and who laid down his life for you and me.  But this man, who was more than a man, didn’t stay in the grave or on the cross, and as I watch the sun rise on this beautiful morning I’m reminded of that fact, and I’m thankful.

“And the battle’s just begun.  There’s many lost, but tell me who has won.”

Easter has long been a favorite holiday of mine.  We all know that Christmas and Easter are the Super Bowl of Sundays for the Christian church, and it was always a big deal in our household growing up.  We colored eggs.  We hid eggs.  We found eggs.  We occasionally peeled and ate said eggs.  Easter Sunday morning resulted in Easter cards to my sister and I as well as baskets filled with chocolate bunnies, and jelly beans, and peeps and occasionally a gift or even money.  It usually meant new clothes for church as well (see the fancy duds just below).

(Easter probably 1984 with my sis, and cousins Kim and Kasey)

Our family spent many Easter’s at my grandma’s house, and I loved being there over Easter especially if my cousins were around.  Many times we would color our eggs at grandma’s house.  Sometimes we’d color them at our own house and bring them with us.  There’s no forgetting the vinegar-y smell that came along with the Paas coloring kits of dying those hard boiled eggs. 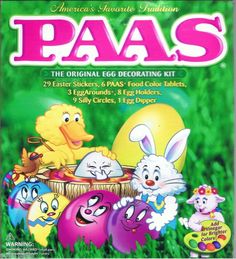 As the oldest cousin I would take all of our hard boiled colored eggs and all of our plastic ones as well and hide them for my sister and cousins.  There would always be one golden plastic egg that I would fill with money and hide really well.  Sometimes I would hide it so well that no one could find it without some hints or a round of “hot or cold.”  It was a major competition to find this golden egg while also finding more eggs than the rest of the cousins.  After the big hunt then the rest of the cousins would have their turn at hiding the eggs as well, because hiding them and watching everyone try to find them is half of the fun.  Those Easter afternoons would be spent hiding and finding eggs and eating lots of chocolate while all of the grown-ups sat around and watched tv, told stories, laughed, and took naps.

Well, to answer the question, U2 has now been singing this song some 35+ years in concerts and it’s still more relevant than ever.  This classic from their 1983 album “War” was the third single released off of the album and peaked at #7 on the U.S. Billboard Hot 100.  The song generated plenty of discussion and controversy initially because of its overtly militaristic lyrics that mainly alluded to the Sunday in 1972 in Deery, Northern Ireland where British troops shot and killed many unarmed civil rights’ protestors.  Bono would ultimately introduce the song by uttering the phrase “It’s not a rebel song” because the song is really so much more than that.  It’s anti-violence and revenge.  It’s pro-peace and pro-love.  Two things Jesus himself would approve of.

I love that the video for the song was shot just outside of Denver at the famous Red Rocks Amphitheatre.  I wrote about my first visit to Red Rocks last summer when I caught Jackson Browne so it’s still a special memory and those sights and sounds come flooding back watching a young U2 perform.

In the summer of 1983 U2 was transitioning from college crowd favorites into bonafide superstardom, so that’s how they could play a smaller venue like Red Rocks back before they became one of the biggest bands on the planet.  Here is U2 on a rainy June 5th night waving the white flag of surrender and peace, but also the white flag of goodness, of light, and of holiness.  Listen carefully to the final words of the song and take some time to reflect.

Thanks for reading and once again a happy Easter to you!