“Hot Summer Streets and the Pavements Are Burning…”

“I sit around.” – Bananarama

In the summer of 1984, America took a stunning crane kick to the face when a karate movie featuring a young Ralph Macchio and an aging Pat Morita debuted and proceeded to win the hearts of Americans everywhere.

The underdog story features an unlikely friendship between a Jersey kid relocating with his mom to Recedo, CA, named Daniel LaRusso (Macchio) and the maintenance man (the late, great Pat Morita) at the apartment complex he and his mom move into.  Throw in a gang of karate bullies, their ex U.S. Army Special Forces Green Beret sensei, a few cool songs like this one today, some iconic sayings (“Wax on. Wax off.” “Paint the fence.” “Sweep the leg.” etc.), and you had the makings of a classic movie.  And that’s just what it became – classic.

Macchio and Morita formed a powerful duo in the 80’s

Around that same time I owned a “how-to” book on Judo.  Judo was very popular for some reason back in the 60’s, and I’m pretty sure that’s when the book was written.  I’m not even sure how I came to possess such a book, but I thought I could read the book, look at the pictures, and teach myself Judo all from the comfort of my own bedroom!  Sure, it wasn’t karate, but it was still a lot of kicking and punching, and I was going to be a total badass!

Well, amongst minor details like my overall lack of desire and dedication, I also didn’t have a partner to practice on nor anyone to tell me if I was doing everything correctly.  Eventually (like two days later), I just gave up on learning judo, but told myself I would learn some sort of martial arts at a later date.  I never did, but I always imagined that one day I would be the skinny underdog who was picked on but eventually became a karate champion by defeating those same bullies along the way in a tournament in front of thousands.  Oh, and I would win the heart of the prettiest girl in school just like Daniel LaRusso of course!

“The city is crowded, my friends are away, and I’m on my own”

Fast forward to the spring of 2018 and as I was browsing through an issue of “Sports Illustrated,” and I saw an advertisement for a new Youtube series called “Cobra Kai.”  Realizing that this new series stars the original characters from “The Karate Kid” in Macchio and his enemy, Johnny Lawrence (outstandingly played by William Zabka), I watched all ten 30 minute episodes over the course of about three days and loved it.  I loved it so much I told my wife and daughter that they needed to watch it, and so I watched it a second time with them.

Then in “The Karate Kid”

and now in “Cobra Kai”

The story picks up some 30+ years after the All Valley Championships and catches us up on what has transpired, and what is going on in the lives of Daniel and Johnny.  Lawrence, down on his luck, reopens the defunct Cobra Kai dojo reigniting a rivalry with the already successful Daniel LaRusso.  Throw in some flashbacks to the original movie, introduce a whole new crop of young talented characters, provide some brilliant writing by Josh Heald, Jon Hurwitz, and Hayden Schlossberg, and you have something special.

It’s definitely PG-13 for all the language and high school humor, but if you are a fan of “The Karate Kid” or just a fan of well-written, action packed comedy dramas then you should give this series a shot.

“It’s too close for comfort, this heat has got right out of hand” 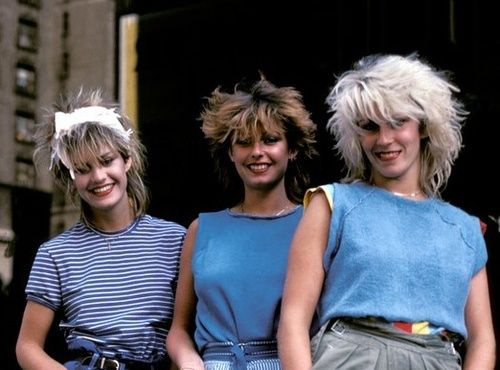 The movie and subsequent MTV video helped introduce us to three quirky young women that summer called Bananarama.  With their smoky eyes, messy, low-hanging bangs, and British accents, my 13 year-old self was immediately seduced by this London trio.  I was transfixed to my MTV anytime this video appeared.  “Cruel Summer” helped propel Bananarama to top 10 status for the first time ever in the U.S., and the song also reached #8 in their native UK.

I found it interesting in an interview by original member Siobahn Fahey that the group was first introduced to cocaine during this video shoot by some local dock workers.  Fahey was quoted as saying “That was our lunch.  When you watch that video, we look really tired and miserable in the scenes we shot before lunch, and then the after-lunch shots are all euphoric and manic.”

That alone made me watch it again just to see if I could tell.  Not sure that I really could, but maybe you can when you watch.  Nonetheless, this song is actually a rather dark song about being alone under an oppressive heat watching the summer slip by.  But with it’s upbeat tempo and catchy chorus, it still has to be a staple on any summer playlist.

As a bonus, here is the song featured in “The Karate Kid”…

Thanks for reading, and just remember:  Strike first.  Strike hard.  No mercy.