“We’re No Strangers to Love” 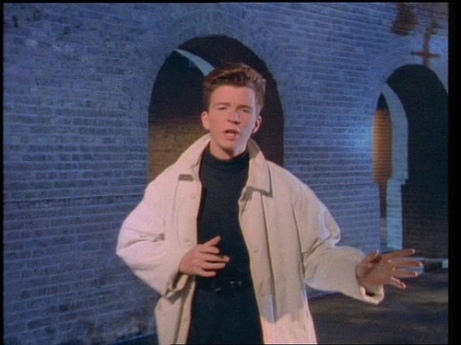 Every time I hear something about rules I think about a great scene from one of my favorite movies –  “Grease.”  Just before the big race where Leo, the leader of the rival gang The Scorpions, and John Travolta’s character Danny Zuko race for “pinks,” (pinks you punk! Pink slips, ownership papers!) Leo lays down the rules by saying “the rules are… there ain’t no rules.”

So cool, so poetic especially coming from a “greaser.”  But rules are not where I’m going with this post today (I just couldn’t pass up a chance to quote from “Grease”).

“Never gonna let you down.”

Where could I possibly be going with a Rick Astley song today?  I’m not going to “rick-roll” you, but I am going to be a little reflective, maybe even a little insightful.

Besides being a famous lyric from the 1987 Astley song, it’s also a line in a beautiful praise and worship song called “King of My Heart” by John Mark McMillan.  The line goes “You’re never gonna let, never gonna let me down.”  That particular lyric is repeated numerous times to close out the song.

Such an easy sentence.  Such a hard reality.  Truth is we are let down every day.  We are let down by friends, by family, by co-workers.  The world disappoints us.  We become accustomed to being let down.  It’s easy to become cynical and jaded.  We are not even surprised anymore.  Maybe shocked or angry or frustrated, but not really surprised.  We almost sit around waiting for the next proverbial shoe to drop.  Being let down and letting down others is part of our flesh.  It’s part of the course fabric of this life on earth.

The lyric in the song obviously refers to a higher being.  A God, a Jesus that many of us worship, myself included.  But try telling that line to a grieving mother who loses a child in a car accident or watches him slowly waste away to cancer.  Tell that to someone who loses a loved one in a senseless shooting at a concert or a small baptist church.  Tell that to a son or daughter that has to watch an aging parent slowly lose their mind to dementia.  “You’re never going to let me down” is not easy to accept, nor should it be.

Life is funny and rewarding and beautiful.  And life is tough sometimes.  Whatever the situation though – whether you’re in a dark tunnel right now, coming out of one, or on the verge of going into one, just know that someone else has been in your situation too.  Someone else may be in that same dark tunnel with you right now, but you just can’t see them.  The darkness may seem cold and lonely, but it’s really just the absence of light.  Bring with you a light in those tough times be it a friend, a family member, or even a complete stranger who knows the way.  And during that time try as hard as you can to muster some faith and believe “You’re never gonna let, you’re never gonna let me down.” 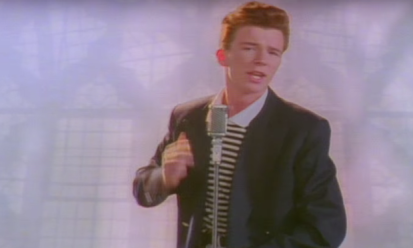 One of the reasons I chose today’s song and video is because it helps lighten the mood.  Life’s difficulties are not to be dwelt upon constantly and carried around like a sack of bricks.  That will eventually just crush you.  Put that sack down for a minute and enjoy the mindless beat and dance moves in today’s video.  It has to put a smile on your face.  It does for me.

This song went all the way to #1 on the charts in 25 countries!  It was a 1988 world-wide smash for Rick Astley, whom I thought was a smooth, soulful brother when I first heard him on the radio.  I was surprised to find that the rich, smooth, baritone voice belonged to a pale-white, red-headed singer hailing from Lancashire, England.

Blessed with a cool voice and obviously a fairly good sense of humor, the video features three changes of scenery and clothes so I would assume the video was probably shot in a day.  He sports a cool trench coat at night in one scene (top picture), a suit jacket look that would fit nicely on a yacht in another, and a denim on denim look that was so  totally 80’s.

While Rick was dominating the charts in 1988, this was my look circa 1988 at Norman High School.

Look at that dark wavy 1988 hair and those guns!

Thanks for your time,

Like Loading...
This entry was posted in Uncategorized and tagged faith, life, Never Gonna Give You Up, Rick Astley. Bookmark the permalink.

1 Response to “We’re No Strangers to Love”