“Born Down in a Dead Man’s Town”

“The first kick I took is when I hit the ground.” – Bruce Springsteen

I have all kinds of hats – fedoras, flat caps, tons of baseball hats with rounded bills new and vintage, a flat bill baseball hat, and even cowboy hat thrown in for good measure.  I have adjustable hats and fitted hats.  I’ve had hats with chains and polka dots and rips in them.  I just like hats.  My wife will tell you I have too many hats and that I have a lot of shoes too, and she’s right.  I do have more hats though because I don’t have an unlimited clothing budget and we all know hats are less expensive.  Simple mathematics.  Bottom line though – I like and can respect a strong headwear game.

My newest hat is this patriotic one I purchased at a local business called Junk Brands.  The female-owned, Bentonville, Arkansas-based company is probably best known for their large array of headbands, but to quote them, they “have more cool stuff than just headbands.”  Case in point… 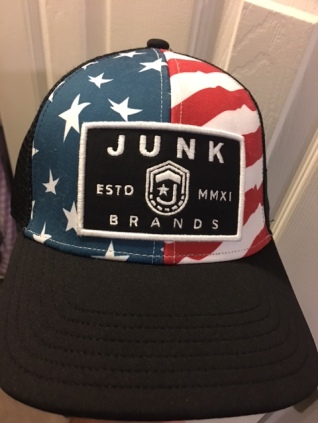 I love the design of this hat, so when I stumbled across it online I went down and purchased it ($28.99).  Though a little on the pricey side for an adjustable hat, I had been looking to purchase a patriotic hat the past few months, and the ability to buy and support local was what tipped the scales for me on this purchase.

The friendly guy (should have got a name, but for this post he’ll just have to be “friendly guy” Sorry) behind the counter told me they try to come out with 14 new designs every month.  That seems like a lot of SKU’s (stock keeping units) to me, but I suppose the model is working for them so far.  It must be.  They manufacture their stuff on site with some of the most innovative equipment just a few miles from the world’s largest retailer, and have been in business since 2011 apparently.  That’s what the hat says after all – ESTD MMXI.  Glad I took those Latin classes in high school!

I thought the snap back portion was interesting and different from what I’ve seen on most of my other hats, and the interior band is made with a moisture-wicking fabric to absorb those pesky beads of sweat that originate around my hairline.  I like finding a hat that fits well, but also has something unique about it and I found that with this hat.  The mesh is comfortable (I’ve had mesh hats with the hard, less-giving mesh, and I try to steer clear of those now).

The downside to this positive review is that there is now a good possibility that once they realize a middle-aged white man is writing about how cool Junk Brands is that they may realize the company has peaked or has pushed past its prime.  Lol.  You’re demographic is changing!  Time to sell the company for a nice fat profit!  It’s either that, or they just might need to reinvent themselves into something else kind of like Facebook has since your parents joined making it the un-coolest of all social media platforms, but still a major force in the world today.

Speaking of cool and giving a tip of the cap to part of the reason this blog exists, here is a look at some of the more memorable headwear stars from the illustrious decade of the 80’s: 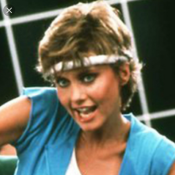 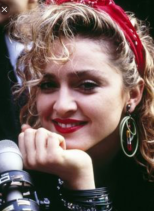 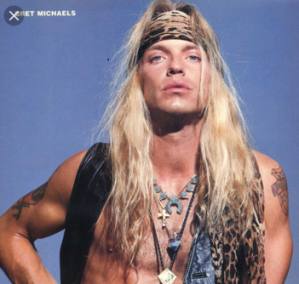 I could see Axl Rose (middle row bottom) and Bret Michaels (bottom right) being the biggest Junk Brand supporters back in the late 1980’s, and even today for Mr. Michaels as I rarely see that guy without his headband and/or his quasi-cowboy hat resting on top of his dome.

“I’m ten years burning down the road.  Nowhere to run ain’t got nowhere to go.”

Well Bruce that’s a depressing lyric, but hey, a happy July the 4th to you, the reader, anyway! 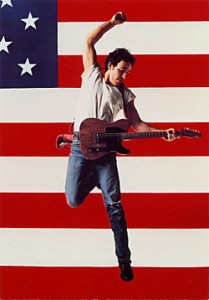 I’m a hat guy and I’m a Bruce guy, and I also realize this isn’t as patriotic of a song as the title suggests or you may have even been led to believe.  In fact, Bruce wrote it as kind of an anti-anthem about the hardships and unfairness Vietnam veterans encountered upon their return home from the war.  The bitter verses are often just kind of ignored while the chorus is happily taken out of context as proud Americans scream out with exuberance and pride.

For such a serious song I was always amused and perplexed by the very end of this video.  Who thought… “ahh, let’s get a close up of Bruce’s ass… that’ll be the perfect ending!  The ladies will love it!”  Lol.

Yes, I realize it’s also the album cover from that iconic 1984 album, and as Bruce once jokingly described in “Rolling Stone:” “… in the end, the picture of my ass looked better than the picture of my face.”  Classic.  To quote Bruce again (albeit from a different song), “there’s a joke here somewhere and it’s on me.”

Regardless of the reasoning, for your 4th, here is that blue-collar, jean jacket, head-band-wearing legendary voice for the working man, Bruuuuuucccceeee…

Don’t blow any limbs off, bring a strong head-wear game today (I will be), and thanks for reading!

Like Loading...
This entry was posted in Uncategorized and tagged America, Born in the USA, Bruce Springsteen, Fourth of July, hats, headwear, Junk Brands. Bookmark the permalink.