“I’m your Messiah and you’re the reason why.” – Prince

Prince is pointing at and talking to u.

Recently I completed a 2 week fast that I’ve been participating in with other members of the church I attend.  It’s not necessarily a no-food-at-all fast, but I chose to fast food from sunup 2 sundown everyday 4 two weeks.  One of my friends jokingly asked me if I was observing Ramadan (an Islamic celebration that also includes fasting from sunup 2 sundown).  He works 4 a large corporation that makes its’ living largely by selling poultry around the world.  He was on a no-meat fast so I started referring 2 him as a Vegan, and thought about endorsing him on Linkedin 4 his vegetarian ways.  I didn’t though.  It was all in good fun.

“You’re just a sinner I am told.  Be your fire when you’re cold.”

When you’re skipping a meal and snacks throughout the day time does not fly by, and that’s a good thing.  The fast is supposed 2 make you a little uncomfortable.  You’re supposed to stop and think and reflect and pray when those hunger pains hit.  I wasn’t listening 2 Prince to divert my attention from being hungry if you think that’s where I’m somehow going with this post.  I was actually listening to Matt Redman and “10,000 Reasons” every morning during this time.

Matt Redman is also pointing and talking to you.  He’s practically just like Prince!

Everyone, sing along with Matt!  “Bless the Lord, oh my soul.  Oh my soul, worship His holy name…”  Love that song.

Anyway, because of the fast, I got out of bed earlier than normal those two weeks.  I was up no later than 6:30, and on most days I was up by 6.  That might not be early for some of you, but for me it is.  Because of this our dog now starts whimpering and whining very lowly around 6 am in her room and it increasingly grows stronger.  By 6:30 it becomes unbearable and I let her out 2 go 2 the bathroom.  The main thing is she knows it is time 2 eat.  She’s hungry.  I was hungry every afternoon for two weeks.

But on the last afternoon of my fast, this particular Prince song came on the radio as I was driving back to the office from an appointment.  It got me thinking about the lyrics (populated throughout this post), and Prince’s use (intentionally or not) of spiritual imagery throughout the song.  It’s really very interesting considering what a huge pop hit this was 4 the Purple One back in the winter of 1984-85.

I can still remember the 8th grade girls at Whittier, many names and faces now a blur, but they were wearing their black Madonna fingerless gloves, and cool shades, walking around with their cool friends.  They were singing this cool song (8th grade was very cool, alright?), and using the hand gestures associated with it.  If you paid attention at all in 1984 then you know what I’m talking about – point to your eye or use your pinky finger or both (I), make a fist (would), point a gun at your head (die), show four fingers (for), and then point at the person you’re singing to (you).  I would die 4 u.  Darling if u want me 2! 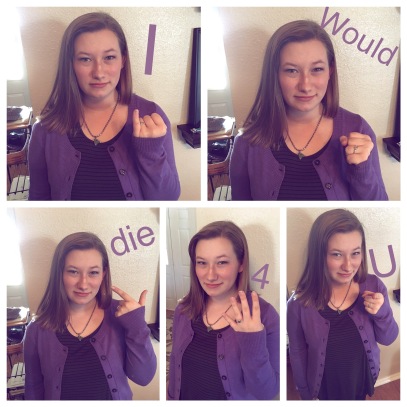 “Purple Rain” would be the pinnacle of a spectacular career 4 an other-worldly musician.  My appreciation 4 his talent grew the older I became and the more I read or saw about him and his ability to play many instruments proficiently as well as writing, singing, arranging, etc.  His guitar playing on a performance of “While My Guitar Gently Weeps” along with Tom Petty, Jeff Lynne, and Steve Winwood at the Rock & Roll Hall of Fame in 2004 was incredible.  He really was an enigma in many ways, but aside from his in-your-face sexuality, and his eccentricities he was above all a musical prodigy, and a cultural phenomenon during his peak in the 80’s and early 90’s.

You can see how popular Prince was based on a survey of a bunch of middle schoolers back in 1984!

I read that Prince became more spiritual in the years before he died.  He was a Jehovah’s Witness, which to me is a strange Christian denomination.  Sorry, but if you choose not 2 celebrate Christmas, Easter, or birthdays (among many other strange customs and beliefs) then I am out.  Apparently it fit Prince, and I hope he achieved some sense of peace practicing it.  Personally Jehovah’s Witnesses remind me of someone using their GPS and in cruise control on an interstate, but then making an abrupt exit off the highway because “they know a better way.”  Just stay on the right road man!  Come back!  Come back!

Strange the things that pop into my head during a fast.  I was hungry.  I fed myself with scripture and teachings and prayer and I’m a better person 4 it.  And a post about Prince with a splash of Matt Redman came from it as well.  How many posts have you read where those 2 are mentioned together!?  LOL.  If you think me a little strange or odd, then perhaps…

“I am something that you’ll never comprehend.”

Here is a live performance of the late, great Prince Nelson Rogers and one of my top 5 Prince songs ever… “I Would Die 4 U”

As always, thanks 4 reading

Like Loading...
This entry was posted in Uncategorized and tagged Fasting, I Would Die 4 U, Matt Redman, Prince, Purple Rain, Spirituality, Whittier Middle School. Bookmark the permalink.