“Years May Come and Go”

I’m having a hard time concentrating today, and it’s not because tomorrow is the national holiday that celebrates a large, ugly, rodent who will dictate the remaining length of our winter.  No, today’s post was spurred on because a co-worker announced her resignation today.  I thought about writing this post months ago after another friend left the organization for a different job out of state, but for whatever reason this post just never made it into words… until now.

Today is actually the third time in the last 12 months I’ve lost a favorite co-worker of mine who has decided to move on to a new job, and it sucks.  Natalie left today and everyone in the bank let out a collective sigh of disappointed resignation.  Make no mistake, I am not disappointed for her or the others that have left in the last 12 months.  I’m happy for them and their families, and the opportunity that lies ahead.  It’s an exciting and anxious time in their lives.  I’m disappointed for me.  I’m sad for me.  Everyone that’s ever worked somewhere with good, talented people knows what that’s like.  It happens in every profession everyday.  It’s nothing unique, but it feels like the end of a little era.  Changes like this make me stop for a moment and reflect, and wonder how the hell it went by so quickly.  And it also makes me a little sad to know that it won’t ever be the same.  I also wonder to myself:  what did that time together produce?

I met Ron the first day I started with my current employer in April 2013.  With a hearty laugh, a servant’s heart, and a mild resemblance to Larry Bird (ironically, Ron is from Indiana and actually helped to run Larry Bird’s charity golf tournament), I liked him immediately.  We went on numerous sales calls and lunches and I was always amazed at his ability to never meet a stranger.  This is a gift, and it’s not one I possess, but I took mental notes and found inspiration in his ability to quickly make “life-long” friends.  With a fondness for certain phrases, anyone who knows Ron knows some of his favorites, and I’m no different.  He might mention how he “played basketball poorly at USC” or he might talk about his spirituality and his lack of fear of dying – “we’re all in line, but I’m not volunteering to move up.”  Sometimes it was his way of looking at business transactions – “what you don’t make on the peanuts, you make up for on the popcorn.”  If Ron likes and respects you then he might describe you as an “absolute rockstar” to anyone who would listen.  Well, Ron will always be a rockstar in my book, and the next two former co-workers (it’s still strange to me referring to these three as “former co-workers”) are rockstars to me as well.

Ron and I with our beautiful wives

I worked with Ruston for the better part of 10 years and we became closer and closer friends as the years wore on.  He served as my loan coordinator for most of those years, which was a role he quickly became overqualified for.  Nonetheless I loved our daily conversations that might be about family or work or just something ridiculous.  He taught me a lot about patience and just enjoying the moment.  We had hundreds of talks through the years and the majority of them contained laughs.  Many of those laughs happened while we ate lunch together as well (especially the last few years we worked together).  It was always a pleasure to be around him whether we were chowing down on a “Slim’s plate,” at Slim Chickens, or “The Heisman” at Billy Sims BBQ (which ironically closed down shortly after Ruston took another job and moved out of town).  We never missed a chance to share our lives with each other and make each other laugh.  We still communicate often but I miss the daily chats.  My family was at the hospital for the birth of his first two children (Brandt & Nora), and only missed the third one (Ansley) because we were out of town.  I helped him load the moving truck his final day in NW Arkansas and told his dad what an outstanding son he and his wife raised.  He’s humble, kind, someone I would trust with my life, and just an all-around good man.  I’m forever grateful for the days we spent working together.

Ruston’s last day at the bank 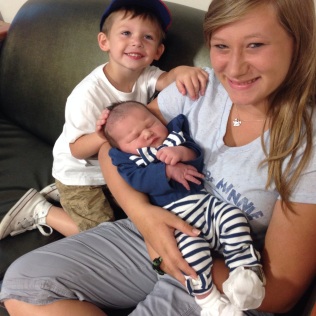 I worked with Natalie for only about three years, but it was a fun three years.  She infused energy and fun and creativity into work from day one.  We commiserated over boring banking events and laughed at the inane ridiculous inefficiencies that sometimes go along with the job.  We bonded over community events, meetings, a love of our families, and daily pop culture happenings.  My wife and I visited her and her husband after the birth of their second son, Witten.  Though I’m anti-Dallas Cowboys, I just can’t find it within me anymore to cheer against Jason Witten when the Cowboys are playing.  With basketball being my favorite sport I’ve been enjoying the recent weekly updates on her oldest, Brody (or as I now call him – “LeBrody James” after a recent 30 point performance in his Upward Basketball league game).  I am already planning my first trip to see a game at the P.G. gym.  I want it to be when LeBrody begins playing varsity basketball for the Tigers, and I honestly can’t wait for that day.  I’m sure I’ll blink and it will be here in no time, and our three years will be but a blip in time becoming harder and harder to recall as the years pass.  The definition of a shooting star in our industry, I have no doubts that Natalie will be running her own successful bank or business one day if that’s the path she chooses. 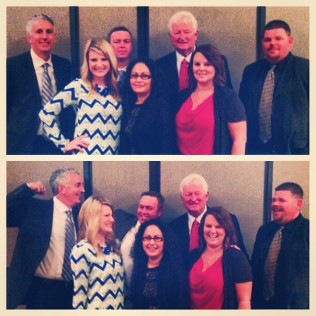 People come and go through your life all the time.  I still work with many great people who continue to make work fun day in and day out.  Working with someone for many years makes you wonder sometimes if you see them more than your family.  You become invested in their lives.  It’s just a natural byproduct of being interested and learning about your fellow co-workers.  You listen to their problems.  You celebrate the good times and you empathize during the sad times.  You’re there with them during monumental moments in their lives – weddings, births, promotions, deaths, etc.  You start caring for these people like they’re actually family members, and in many ways they are.

I asked at the beginning of this post what that time together produced?  That’s pretty easy.  It produced a better me.  Three unique individuals who I dearly love are now all a part of the fabric of my life here on earth.  Every time I see one of those quilts that has passed down from generation to generation with patches and notations all over it I think that’s what our lives are like.  We meet new people everyday.  We strike up relationships and we enjoy moments in time together.  These people and events impact our lives in different ways at different times.  I now have a patch of Ron and of Ruston and of Natalie sewn onto my hypothetical quilt, and I’m so very thankful for that.

“All my life, you’re a friend of mine”

(Personal note:  I’ve told each of you before, but it’s worth repeating – it was great fun working with each of you, good luck wherever this amazing thing called life takes you, and know that wherever you go and whatever you do I’ll be cheering for you.)

In keeping with the theme of this blog, today’s featured video features the duet between Jackson Browne and the late, great “Big Man,” Clarence Clemons.  It was a top 20 hit in 1985 and drips of 80’s deliciousness.  It features the actress Darryl Hannah (Browne’s girlfriend at the time) in the video holding a bulky 80’s VHS video recorder, and she actually sings background vocals on the song.  It’s a campy little video and song, but the message is simple and genuine, and I’m dedicating it to three of my favorite co-workers.

Like Loading...
This entry was posted in Uncategorized and tagged Clarence Clemons, Jackson Browne, Natalie, Ron, Ruston, You're a Friend of Mine. Bookmark the permalink.