“I take a musclebound man and put his face in the sand.” – LL Cool J

Yesterday I was playing in the local Charity Challenge golf scramble at Pinnacle Country Club in Rogers, AR.  One of our foursome was a retiree named Harold Cornett from Russellville, AR, who happened to grow up in New Orleans.  Well my dad was a two-time All-American for the Tulane University Green Wave in New Orleans in the early 60’s.  When I mentioned who my dad was Harold was almost in disbelief.  He and his friends had grown up going to Tulane games and playing basketball on the playgrounds.  He told me that when they played one of them was always pretending to be “Jumpin'” Jim Kerwin.  My dad was a pretty big deal in the hoops scene in New Orleans during that time.

My dad is also a very competitive dad.  He’s still competitive to this day only it’s at the poker table instead of the basketball court or on the golf course.  Back then he possessed a killer jump shot, was a solid rebounder as a 6’2″ guard, and he could knock down a hook shot right-handed or left-handed although he will tell you his younger brother Tommy’s was better (Tommy was actually known as “Captain Hook” during his time at Centenary).  He was a bad man with a ball in his hands.

Pretty sure it was the Christmas break of 1988 and I was a senior in high school.  I was at the Lloyd Noble Center after an OU basketball practice.  My dad was in his fifth season as an assistant coach for Billy Tubbs and the OU Sooner basketball team.  He would spend one more season on staff before jumping to join Dana Altman for two seasons at Kansas State. The Sooners had lost to Kansas in the National Championship game earlier in the year, but still had All-Americans Mookie Blaylock and Stacy King leading the way on this ’88-’89 team. 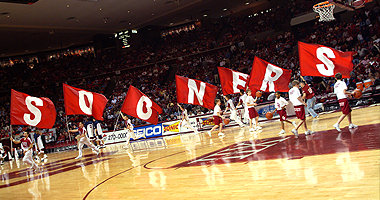 My dad was 47 at the time, which is just two years older than I am now.  You know the phrase that was even a popular Toby Keith song – “I’m not as good as I once was, but I’m as good once as I ever was.”  Well, this day was fitting of that song for my dad.  I went through a few shooting drills as dad had me shooting 10-15 foot jumpers and then worked a little on my three point shooting and incorporated some full court ball-handling into the drills as well.

“Sparrin’ MC’s and I’m a never get whipped.  When I retire I’ll get worship like an old battleship”

We finished the workout with free throw shooting.  We decided to shoot 100 free throws each to see who the best free throw shooter was.  Would you bet on me, a 17 year old senior in his free throw shooting prime (and former state of Oklahoma Elk Hoop Shoot champ) starting for one of the powerhouse high schools in the state – the Norman High Tigers?  Or, is your money going on the old man – 20 years past his prime as a two-time All-American at Tulane University where he led the SEC in scoring one season, and then spent time as a semi-pro player for the Phillips 66ers AAU team located in Bartlesville, Oklahoma?  Me right?  Whatever. 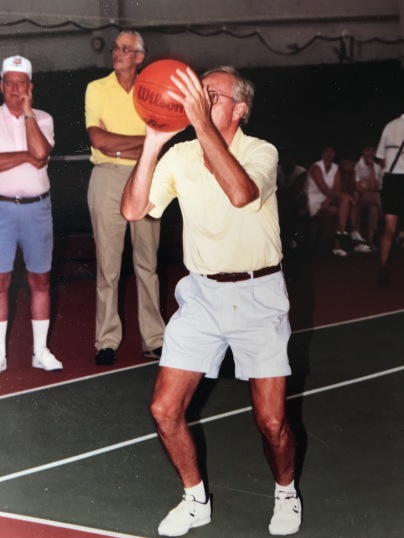 My dad knocking down free throws at a Phillips 66er reunion many years ago.

Well, I stepped to the line and I was in the zone.  I proceeded to knock down 96 out of 100.  For you math majors, that’s 96%.  That’s better than NBA players shoot during the season!  Only then Toronto point guard Jose Calderon qualified by shooting enough free throws in the 2008-09 season when he hit 151-154 for a 98% clip.  Other than that, not Mark Price, not Steph Curry, not Steve Nash, not even the great Rick Barry and his “granny” shot made 96% for a season.  Sure I was shooting in an empty Lloyd Noble Center, but I also wasn’t even close to a NBA caliber player either.

My dad used to tell his players when he was a coach at Seminole Junior College in Oklahoma from 1980-1984 that if anyone beat him shooting free throws that he would buy them a steak dinner.  I know one thing.  My dad didn’t buy very many steak dinners during that time.  Well, he stepped up to the free throw line and hit his first ten in a row.  Then he made the next ten.  The next ten after that.  Ten more, then ten more again, and before I knew it, he had made 100 in a row!

“I’m the pinnacle that means I reign supreme, and I’m notorious I’ll crush you like a jelly bean”

I’m pretty sure my dad and LL would have got along just fine on the basketball court because of their penchant for talking trash.    Anytime he wanted to really rub it in he would say “it shouldn’t even count if it hits the rim.”  Yeah, I get it, dad.  You’re still a good shooter.  After demoralizing me by making 100 out of 100 I quickly shook it off realizing that I was kind of getting to see what my dad looked like in his prime and urged him to continue.  To this day, I have never seen any footage of my dad playing even though I’ve searched for some.  I’m convinced there is some footage out there, but I just haven’t found it yet.

One.  Hundred.  Sixty.  In a row.  I’m not sure I could have made 160 layups in a row at anytime during my prime.  Like I said, my dad was a bad man with a ball in his hands… even at the age of 47.  And he still brings back fond memories to guys who are now in their 60’s and 70’s who you might randomly meet on a golf course in Rogers, Arkansas.  As much as it was a thrill for Harold it was even more so for me to play golf with a man who had seen my dad play numerous times in the old Fogelman Arena on the campus of Tulane University.  Harold told me as he was leaving that he couldn’t wait to get home and call all of his old buddies and tell them that he had played golf with “Jumpin'” Jim Kerwin’s son.  Well, I couldn’t wait to call my dad and tell him what a small world we really live in.  My only regret from the day was that my golf game wasn’t as impressive as Harold’s memories of my dad, “Jumpin'” Jim Kerwin.

Today’s 80’s hit is one of my favorite 80’s raps.  LL Cool J (Ladies Love Cool James) burst onto the scene as braggadocious 17-year-old in 1985 with his “Radio” album, but I really jumped on the LL bandwagon with his 1987 release “Bigger and Deffer.”  The album went platinum three times and was probably best known for the commercially successful rap ballad “I Need Love.”  But, it was “I’m Bad” that hit you right in face when you popped in that cassette.  I wore the cassette out and in particular that song.  I would listen to it religiously on my way up to the Norman High School gym before home games as a way to pump myself up before a basketball game.  Our team used to also play it as we came out of the locker room and onto the floor during my junior season.  We were bad meaning really good.

Well, here is a then 19-year-old LL with a bad video.  And, by bad, this time I mean bad, not good.  LOL.  LL must have had an IV of caffeine hooked up to him before he shot this thing, because he is hyped up during this video.  This video must have also been an audition tape for his current role as Detective Sam Hanna on “NCIS Los Angeles.”  Check out a jacked up James Todd Smith rescuing his lady all the while telling us “I’m Bad”…

Thanks for your time, and go Green Wave.