“You Tell Her You Don’t Have the Time”

I tried to talk my grandma into recreating our old picture for her 100th birthday, but she said no.

That quote above is from Kenny Rogers, but let’s talk about time.  How’s this for time…

In 1916, much of the world was in the midst of World War I, and the British introduced tanks for the first time in war.  Woodrow Wilson was President of the United States and would get re-elected in November, and Weeghman Park, now known as Wrigley Field, opened in 1916.  On August 12th of 1916, my grandmother, Ruby Ellen (Jackson) Duke was born.

We just celebrated that milestone.  In the last 100 years my grandma has lived through stock market crashes, The Great Depression, the dust bowl era, the building of the Empire State Building, the Holocaust, World War II, wars in Vietnam and Korea and in the Gulf.  She’s seen prohibition, the first man in space, the civil rights movement, and every Super Bowl.  Her first Olympics was the 1920 games in Belgium that featured the first flying of the Olympic flag (the U.S. led the medal count that year as well with 95 medals; 41 of which were gold).  She has lived through parts or all of 17 different presidents with an 18th one coming this November.

Yes, my grandma has seen much in her lifetime.  At her party on Saturday, where some 70 people showed up to honor her, we heard from her children, nieces and nephews, grandchildren, pastors, and friends.  One of her best friends, Mavis Bacon, was in attendance at 97 years young.

My grandma has often said that she feels like she’s lived three different lives.  One before she was married, one while she was married to my grandpa Kay Duke, and a third as a widow for over 40 years since he passed away.

One of the great things about growing up with a grandma like Ruby was that she was the central location for most holidays – especially Easter, Thanksgiving, and Christmas.  Christmas was one of my favorite times and memories growing up because that meant I was most likely going to see my Duke cousins (Jennifer, Kimberlee, and Kasey).

Usually I was the oldest grandchild at these Christmas gatherings and when I was about 12 or 13 I started “producing” Christmas plays like a young Martin Scorsese.  Every Christmas Eve I organized the grandchildren that were there which normally included my sister Kari, and my cousins Jennifer, Kimberlee, and Kasey, and we put on our own live theater production.  There were often two acts to these “elaborate” plays that lasted all of 10 or 15 minutes.  Our play budget and wardrobe involved whatever we could find to use around the house.  Usually the first act involved some sort of take on Frosty the Snowman or Santa and Rudolph and the second act usually involved the story of Jesus’ birth.

l-r the angel Kimberlee, Me producer-extraordinaire, Kasey aka Joseph, Kari the shepherd, and Jennifer aka Mary (holding our Lord and Savior, baby Jesus)

Probably the most memorable skit came when I was a 17 year old senior in high school, and I think it was probably our last play to perform.  I’m pretty sure I graduated the following spring, and by this time Jennifer and Kimberlee were probably thinking it wasn’t quite as fun or cool anymore to play Santa or Frosty as they approached their teen years.

Anyway, during the late 80’s and early 90’s one of the most popular “Saturday Night Live” skits was that of the two muscle-bound Austrian jocks named Hans and Franz played by Dana Harvey and Kevin Nealon.

80’s icons Hans (Dana Carvey) and Franz (Kevin Nealon) and they were here to “pump you up.”

Well, that Christmas, the title of the play was “Hans (played by myself) and Little Franz (played by Kasey) Save Christmas.”  Santa was deathly ill, and was not going to be able to deliver presents to all the boys and girls of the world that year.  Fortunately for him Hans and Little Franz were in the neighborhood and showed up at the North Pole just in time with a concocted vitamin and protein formula drink that cured him instantly.  Hans and Little Franz pumped Santa up and helped to save Christmas.  It was one of our finest hours as a live theater, and one that still gets mentioned to this very day by grandma and the others that were fortunate enough to be in attendance at this masterpiece.  I loved every minute of putting these productions on and it was a definite highlight of our Christmas Eve celebration.

Kasey and I actually brought Hans and Little Franz out of retirement and performed a short skit at grandma’s 90th birthday (I’m sure there are some pictures or video somewhere).  I considered doing it for number 100 as well, but didn’t think it would be missed if we didn’t.  But, apparently I was wrong when grandma called Kasey and I out in front of everyone during the party.  I guess Hans and Little Franz missed their golden opportunity on grandma’s golden celebration. 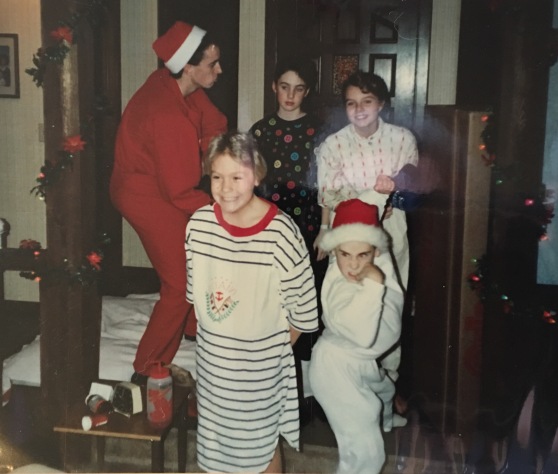 Hans and Little Franz save Christmas circa Christmas 1988 in Norman, OK with Kari, Kim (the enthusiastic looking one), & Jennifer

My grandma is an extraordinary woman who has lived an incredible faith-filled life and has probably touched thousands of lives both directly and indirectly.  When I see or think of my grandma, among many wonderful thoughts and memories, I think mostly of one thing – family.  I owe a great deal to her for my views on family and what it means to love and honor and sacrifice for each other in the family.  Even at 100, my grandma continues to build on and leave a tremendous legacy through her children, grandchildren, and now great grandchildren.  The celebration of her 100th birthday was quite an honor for her, but in actuality it’s all of us that are honored by having her in our lives.

There’s usually an 80’s reference in my posts and I’m not going to leave you without one today, but it’s pretty hard to find a song and/or video that encompasses a 100 year life, so I’m choosing a song from a man that my grandma likes, my parents like, and I like.  In the world of music that trifecta is hard to do, but during the late 70’s and early 80’s there weren’t too many performers with charisma and that were more popular than “The Gambler,” Kenny Rogers.

Kenny wasn’t just a hit-producing machine during those years, but also tried his hand at being a movie star back in 1982 with a race car movie called “Six Pack.”  The movie, which also starred Diane Lane, Erin Gray, Anthony Michael Hall, and Barry Corbin, featured Rogers as race car driver Brewster Baker and a group of six orphans who made for quite an entertaining pit crew.

I went to this movie when I was 11 with my mom and grandma.  The movie was definitely not going to win any Academy Awards and will probably be most remembered by my 11 year old self as having a lot of cursing during the movie especially by the character called “Swifty.”  Even at the end, little Harry (probably 7 or 8 years old) drops the line “No shit, Dick Tracy” to everyone’s amusement, except probably not my mom’s or grandma’s.  I’m sure they were hoping for a little milder language with 11 year old me in attendance.  The movie would probably push up on the PG-13 rating today (PG-13 didn’t start as a rating until 1984) for its’ language.

“Well it’s your mind that tricks you in believin’ everytime.”

Regardless, I only remember seeing one other movie with my grandma, and that was the what-seemed-like ten hour marathon of torture called “Ghandi” starring Ben Kingsley also from 1982.  It went on to win the Academy Award for Best Picture much to my 11 year old dismay.  But, surprisingly, the musical soundtrack for “Ghandi” pales in comparison to my man Kenny’s hit song from “Six Pack.”  Here is Kenny, rocking his 1980-something beard, and sounding good with a live performance of his #1 hit “Love Will Turn You Around.”

Like Loading...
This entry was posted in Uncategorized and tagged 100 years old, Christmas play, cousins, grandma, Hans and Franz, Kenny Rogers, Love Will Turn You Around. Bookmark the permalink.