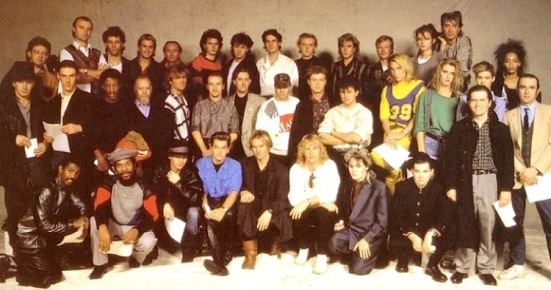 My wife, daughter, and I attended Christmas eve mass with my parents for the first time in years.  It was a 4pm “family service” which felt like every single family in Bentonville, Arkansas was piled into the St. Stephen Roman Catholic Church.  Even the overflow room where the service was displayed onto a large screen was standing room only.

In front of me sat what appeared to be a large traditional Catholic family.  There was the mother, father, three boys and one girl.  The youngest boy who was definitely somewhere around two was struggling to sit still and be quiet and had to be taken out several times while we were there.  The other three children were all probably under 10 or 11 years of age and well-behaved.

It made me think about my Christmases at that age.  Of getting dressed and attending Christmas eve mass wherever we were, and of the nervous anticipation of opening presents later that night, and of course the arrival of Santa and what Christmas morning would hold.  It reminded me of the “Christmas plays” I helped to produce with my cousins all playing important parts, and of course it reminded me of the birth of Jesus and the story as told in Luke that we would read every Christmas eve.

Christmastime is magical and I do realize it’s a struggle for many others, but if nothing else it should produce a hope deep down in your heart whether you know it’s happening or not.  The lights, the smells, the sounds, and the songs should all provide that feeling of hope for a better today and a better tomorrow.

“There won’t be snow in Africa this Christmastime.”

My wife remarked to me that she thought that today’s featured song was kind of “depressing,” and to be fair I guess it is in some respects.  There are starving people all over the world, but chances are if you’re reading this then you’re not one of them so “thank God it’s them instead of you.”

But I never really thought about it that way.  I always thought this song represented new possibilities.  Possibilities that a bunch of talented British and Irish musicians (and yes, that’s U.S. R&B stars Kool and the Gang in the video as well) could come together, sing their hearts out, raise millions and truly “feed the world.”

Ok, maybe I never thought that this 1984 hit would truly end world hunger, but the bell in the song and Phil Collins thrashing away on the skins always gave me an uplifting feeling and vibe even if the lyrics didn’t necessarily do the same.

Bob Geldof and Ultravox’s front man Midge Ure pulled this group together and cut the song in one day.  The single was released on December 3rd, 1984 and garnered much publicity as it entered the charts at #1 and staying there for five weeks as it became the fastest selling single in UK history selling one million records in the first week.  The record raised 8 million pounds within the first 12 months with the majority of the funds being directed towards the famine in Ethiopia.

“Do they know it’s Christmastime at all?”

I like this song and the message it intended to drive home when it was released.  Even if the lyrics are a bit lacking I don’t really care, because the heart behind it is what’s really important.  I have no way of knowing how many people were fed or saved because of this song, but I’m sure there was much good that came from it and still comes from it to this day.  Heck, it’s now 34 years old and I still think about starving people in Africa every time it plays.

Merry Christmas, and let them (or someone you care about) know it’s Christmastime…

Merry Christmas one and all!