“What Started Out As Friendship Has Grown Stronger”

“I only wish I had the strength to let it show.” – REO Speedwagon 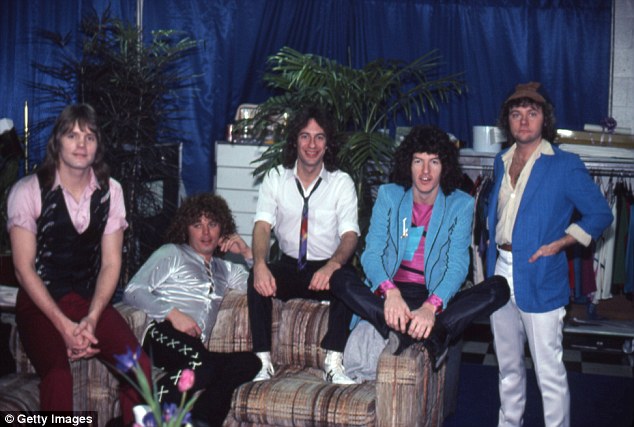 In January of 1985 I was an awkward 8th grader hitting puberty and starting my second semester at Whittier Middle School in Norman, Oklahoma.  That same month, one of the mushiest, lyrically corny love songs of the 1980’s was released.  It was a huge hit… and I loved it.  REO Speedwagon’s “Can’t Fight This Feeling” brought us lyrics about candles in windows, and ships, and crawling around on the floor and crashing through the door.

I disliked a lot of slow 80’s love songs, but this one was somehow different.  By this time the 8th grade Whittier Warrior basketball season was in full swing.  My skinny legs, arms and bushy hair were in full glory in my #10 bright blue Warriors uniform.  We had a full slate of games inside our recreational gym that winter and also traveled to play competition in and around the area including our biggest rivals in Norman – fellow middle school rivals Longfellow (they were terrible) and Irving (they were good). 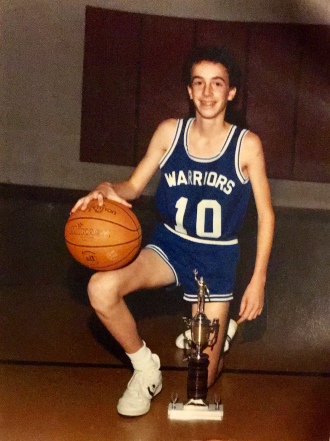 All arms, legs, and braces in 1985.  Pretty sure the trophy was the result of a 3rd place finish at a holiday tournament in Moore.

“You’re a candle in the window.  On a cold, dark winter’s night.
And I’m getting closer than I ever thought I might.”

I also had my first real girlfriend during this time.  She had blond hair, blue eyes, and lived across Highway 9 about a mile from my parents’ house.  We held hands.  We hugged.  We walked with our arms around each other.  We flirted on the playground at recess between serious games of six-square.  I put my arm around her in the movie theater.  We even (gasp) kissed!  I still remember a make-out session in my backyard late one weekend night.  It was a sloppy, wet, I-don’t-know-what-the-heck-I’m-doing, totally awesome mess.

And so this particular song brings me back to the memories of 8th grade “love” every time.  I recall my best friend Barry and myself having a conversation about this song in 8th grade.  It was something to the effect of how the song spoke to both of us because we had these girlfriends, and we just couldn’t break up with them.  We were too cool to be attached, but every time Kevin Cronin belted out that it was time to “bring this ship into the shore, and throw away the oars, forever,”  we just had to agree with him.  We just couldn’t fight the feeling anymore, and I’m positive we weren’t the only ones in the midst of middle school passion who felt that way.

“I tell myself that I can’t hold out forever.  I said there is no reason for my fear.”

We couldn’t see past tomorrow when we were 13.  We were living for the next moment to hold hands, to have a hug, to sneak a kiss.  Those 8th grade moments seemed like they would always be there.  This song, at its’ heart, is really about fear of change, a fear of commitment.  And to some extent, that is what our little pubescent 8th grade minds and bodies were struggling with at that time – change and fear.

Thinking back to those days makes me realize how short life really is.  My 8th grade girlfriend didn’t last past 8th grade, but Barry’s did.  They actually ended up dating through high school, college, and marrying, but then sadly divorced shortly after.  Change and fear are constants through life no matter what your age.

I love this team picture taken near the end of our season for so many reasons.  Our eighth grade faces etched forever in time.  We were so cool.  I still remember all of their names.  I can’t tell you what they’re all doing these days, but I still keep in contact with some of them.  I see a few of them every now and then when I go back to Norman.

One thing about 8th grade basketball, it didn’t matter if you were very good or even really loved basketball, because all were still welcome at this age.  Everyone made the team.  We had 21 players in this picture and I know we’re missing at least one person from this photo because one of our starters is not in it.

I didn’t want this post to just be about an 8th grade flame, but also as an ode to my teammates, my brothers on the Whittier Warriors basketball team of 1984-85, because we were all in this together.  We were all experiencing levels of change and fear during that time.  We battled together against a common opponent with a different name on their jersey, but we also fought with common, bigger opponents then like rejection and insecurity and anxiety.  Those opponents truly never go away I suppose.

By 9th grade, this group had dwindled to about six or seven of us.  And by the time we were all juniors in high school I was the last of this group still playing school basketball.  Others were playing soccer or baseball or football while others were out of sports completely and were just chasing girls and cars and music.  But for a brief time, a beautiful time, we were all teammates banded together by the blue and white of Whittier Warrior basketball.

(The grainy yearbook photo below paints a different set of players that actually totaled 27 players.  This photo was taken at the beginning of the season.)

“And I can’t fight this feeling anymore.  I’ve forgotten what I started fighting for.”

My actual 45 that I still own of the REO classic

This song spent three weeks at #1 in March of 1985 and is considered REO’s most successful single.  The group had achieved the top spot one other time before this with my personal REO favorite.  It was another soft rock power ballad back in 1981 called “Keep On Loving You.”

The band from Champaign, Illinois actually formed in 1967, but it wasn’t until the early and mid-80’s when the band had their most success behind lead singer Kevin Cronin and his awesome hair.  I’m fully convinced that my hair would have looked like Kevin’s if I had been in a band in the 80’s instead of playing basketball.

The video is a trek through the changes in life beginning with a baby and ending with an old man.  What it may lack in continuity or comprehension it more than makes up for in awesome 80’s graphics!

Thanks for reading, and let me know if Kevin Cronin spoke to you like he did to me in 1985!

1 Response to “What Started Out As Friendship Has Grown Stronger”