“You know the time is now.” – John Fogerty

Put me in coach!  That’s a “ready” stance right there.

The time is now!  It’s spring again, and early April brings us to the end of one thing (college basketball) and the beginning of something else (baseball).  I love baseball.  Basketball has always been my first love, but baseball hasn’t been too far behind.  The boys of summer.  The personalities.  The history.  The statistics.  The ballpark hot dogs!

I’ve heard all the comments from the non-fans… boring, too slow, the game is too long, the season is too long, there is too much spitting, too much “adjusting” their… well you know.  I don’t care.  Baseball is not for everyone.

I still remember the sweltering July and August afternoons of my youth in Seminole, Oklahoma.  With baseball glove on one hand and a tennis ball in the other, I would walk across the street to Northwood Elementary School where a large tan brick wall became my opponent many afternoons.

Standing on the scorching blacktop, I would hurl the tennis ball at the mammoth wall with all the might in my skinny white body, and the wall would reciprocate with a tricky bouncer back to me.  I only had to throw the ball a couple of times against the wall before I would work up a good sweat underneath the Oklahoma sun.  I worked on my ground ball fielding.  I worked on catching pop-flys.  I was probably going to be the next Rod Carew or Mike Schmidt.

“Put me in coach, I’m ready to play today.  Look at me, I can be centerfield.”

I was never in centerfield (unless by accident).  I was mostly a first baseman in my younger years.  That’s where you stick the kid that can field, and catch a ball, but is too slow to track down much in the outfield.  People always assumed I was fast and would make a good outfielder because I was thin, tall, and took long strides like a giraffe.  But, I ran more like a slow sheep. 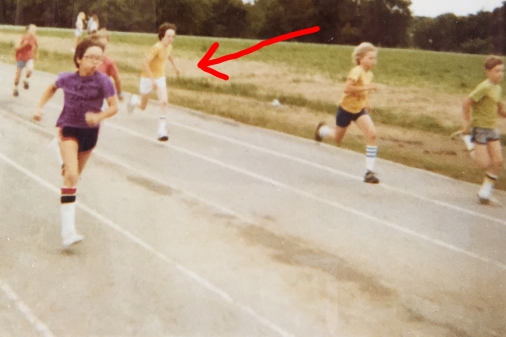 This is by no means the “finals” of the 100 yard dash at Northwood Elementary.  Just one of the many heats that day, and that’s me in 5th out of 6 runners.  I think the kid in last probably fell out of the blocks to start the race.  Not sure if I actually held on to finish 5th or not.

I was a pretty good baseball player in elementary school though even making an all-star team one summer.  My baseball career came careening to an end though in 8th grade.  My worsening vision (I totally missed a fly ball hit to me in right field one game when I couldn’t even see the ball), and the fact that I couldn’t hit a fastball or a curveball or lay down a bunt expedited the end of my career as well.  Baseball teams don’t have much need for a kid who can’t hit, run, or field.

But that didn’t end my love for baseball.  To this day I’m a fantasy baseball nerd.  Yes, I play a pretend game with a bunch of other “grown-ups” and live and die each night depending upon how “my players” perform that day.  A friend of mine, who is also a banker in this area, is commissioner of this league and we correspond regularly over the highs and lows of managing a fake baseball team.  I’ve actually been commissioner of a fantasy football league for 21 years, but truth be told I like fantasy baseball more.

My fantasy baseball team – paying homage to the movie “Field of Dreams” along with those delicious little flavored bears.

My wife and daughter graciously put up with my baseball watching and agree to attend a baseball game anytime we’re in a major league city if the timing permits.  It’s become tradition to attend the game and purchase a baseball hat for each of us of that particular home team.  My goal is to visit every major league stadium at least once in this lifetime.  I have a long ways to go, but am already planning my first trip to Coors Field in Denver this summer while I’m in Boulder for banking school.  (Side note:  as a long time Cubs fan though I will never, ever buy a St. Louis Cardinals hat!)

The boys of summer are coming and I can’t wait to see the home runs, the pitching duels, the hit and runs, and the fights and the managers getting tossed by umpires.  Here’s to them, and here’s to you John Fogerty and your 1985 classic. 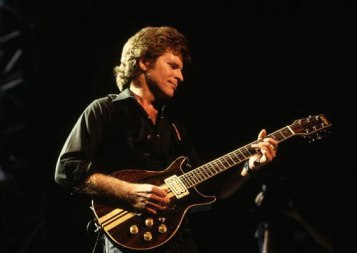 Though it only peaked at #44 on the Billboard Hot 100, the song was honored by the Baseball Hall of Fame and is one of my favorite John Fogerty songs ever.  Talking about Ted Cobb and “Say Hey” Willie and Joe Dimaggio, here is the former CCR frontman, Mr. John Fogerty and the video to “Centerfield.”

Thanks for reading and I hope you catch a baseball game or two this summer.

Like Loading...
This entry was posted in Uncategorized and tagged baseball, Centerfield, John Fogerty. Bookmark the permalink.