“But Time is Short”

“And the road is long”

(Part 2 of my three-part “One Shining Moment” series.  Part 1 was featured here)

“In the blinking of an eye, that moment’s gone”

The year 1988 truly went by in the blinking of an eye.  I was a junior at Norman High School in March of that year.  The basketball world in Norman was abuzz with anticipation and expectations.  As early March rolled around our talented Norman High Tiger basketball team was ranked #1 in the state.  We rolled through regionals, then area, and made our first trip to the state tournament in many years as we loaded up the yellow bus and headed to Tulsa with a senior-laden team.  Unfortunately it was a short trip.  As the only junior starter, I played poorly and we lost in the quarterfinals to the #2 ranked Tulsa Rogers Ropers team led by former University of Arkansas and NBA guard Lee Mayberry (now an assistant coach under Mike Anderson at Arkansas).

I played the game with my left hand and wrist wrapped due to a bone fracture that I had sustained the previous day in practice trying to dunk.  That will go down as one of my dumber moves in high school.   I was hyped and thought I was going to get one that day.  I missed the dunk, grabbed the rim which threw me off balance, and landed awkwardly on the ground.  I shot the ball poorly in the game scoring only six points on two three-pointers.  I also guarded Mayberry most of the game that Thursday night, and I like to tell people I “held him to eight points,” and then say “in the first half” in a real low almost whisper.  He finished with 28 (yes, 20 in the second half), and his little brother Chris hit a few big shots in the second half to keep them in it.  We led by nine at half and by six after three, but we couldn’t put the game away and executed poorly down the stretch which included a turnover on my part.  We just didn’t make plays when we needed to.  We should have won the state title that year.  We had size and could score inside with guys like Barrett Mash and James Holt.  We could score from the outside and had two strong, athletic players in Rob Jones and Chad Thrailkill.  We just didn’t get it done that night, and it’s probably the one game I look back on and wish I had another shot at.  Tulsa Rogers went on to win the state title two nights later. 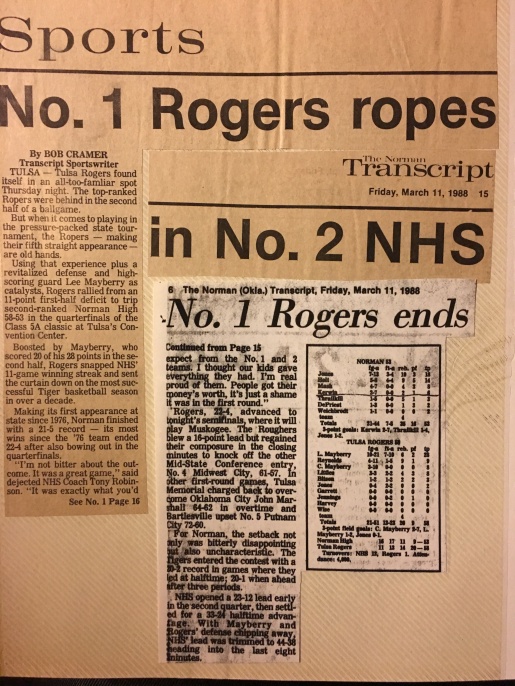 I hate this article every time I come across it in my scrapbook.

Another team that should have won a title that year but didn’t was located in the same town.  The Oklahoma Sooners should have won the national championship in 1988.  It was the 50th anniversary of the Final Four and the event was being played out at Kemper Arena in Kansas City.  The Sooners were only ranked #4 in the country heading to Kansas City where they joined Duke, #2 Arizona, and Big 8 rival Kansas.   The Kansas Jayhawks would win that championship despite having 11 losses (the most of any NCAA champion to date), and are still referred to as “Danny (Manning) and the Miracles.”  The Sooners featured four future NBA players in seniors Ricky Grace and Harvey Grant, and juniors Stacey King and Mookie Blaylock.  My dad told me years later that when the Sooners put up 50 points in the first half and were still only tied with Kansas 50-50, that they were “in some trouble.”

“You always did your best, cuz inside you knew…”

I was fortunate to travel with the team that spring to Birmingham, Alabama for the sweet 16 where the Sooners defeated Louisville and then Rollie Massimino and the Villanova Wildcats.  It was thrilling to watch those two games and watch OU make the final four for the first time in the modern era of the tournament.  From there it was onto the Final Four in Kansas City where Arizona awaited led by former NBA players Sean Elliott, Tom Tolbert, and Steve Kerr.  The other semi-final featured Duke led by senior Danny Ferry taking on the aforementioned Kansas Jayhawks.  Many thought that the winner of the Arizona – OU game would also win the national championship.  Both teams were #1 seeds in their respective brackets and came in with a combined five losses.  In an exciting game that was controlled by the Sooners most of the way, OU held on for a 86-78 win setting up a third meeting with the Jayhawks who had dismantled a pretty good but not great Duke team 66-59 in the other much slower paced semi-final.

“That One Shining moment you reached deep inside.”

The Sooners had defeated the Jayhawks twice already during the season (eight points each in Lawrence and at home).  I was crushed when the Sooners lost that Monday night.  After that 50-50 halftime score, OU (which was not a very deep team and at times only played six guys) seemed to run out of steam scoring only 29 second half points in the 83-79 loss.  Kemper Arena, the site that season of the Final Four, was basically a home court advantage for the Jayhawks as I’d estimate that 75-80% of the crowd was pro-KU.  After the loss I remember walking across the street to the hotel where the KU players and coaches were staying and it was shoulder to shoulder with people celebrating the win.  It was disheartening to say the least, and I and my NHS teammate (shoutout Chad T!) didn’t hang around very long.  But at the same time I also appreciated what a run they made in winning the title that year with 11 losses.

“That One Shining moment you knew you were alive”

I love photographs and the main reason is because you catch that moment forever frozen.  You only look like that one moment for that small window of time.  I look at the team photo above from 1988 and I look at my dad and realize that he’s only two years older in the photo than I am right now.  The players in the prime of their life in 1988 are all right around 50 years old now, but when this photo was taken they formed the best team in college basketball that season.  They were heroes to me.  When they were on, they were unstoppable.  They were alive.  They were the best damn college basketball team that season.  Probably the best I’ve ever seen.

Yes, 1987-88 was a very good year for basketball in Norman, Oklahoma.  Unfortunately it was just a game or two away from being a great one.

Thanks for reading and I hope your team advances (even if it is Kansas).

1 Response to “But Time is Short”