“When the Heart Rules the Mind”

“When you want the dream to last, take a chance forget the past.”  – GTR

I was in Wisconsin recently visiting my only sibling, my sister.  We drove through two states and over 10 hours to get to a pretty little slice of God’s creation about 15 miles to the west of Madison between the two small communities of Black Earth and Mt. Horeb.  My wife, daughter and I spent three days seeing some sights and just enjoying family time with my sis, her husband, and their one-year old, Keller. 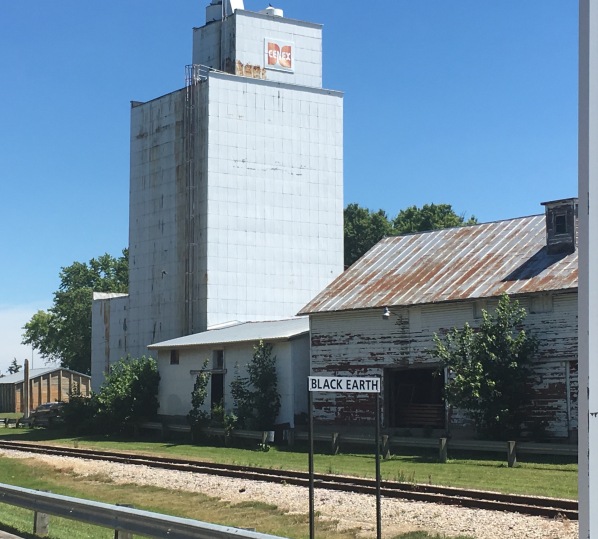 a photo I captured by the tracks in Black Earth, WI, July 2016

Those of you familiar with the little known band GTR (a name apparently derived from the abbreviation for the word guitar) and their one hit “When the Heart Rules the Mind” may be asking yourselves how this song has anything to do with sibling relationships.  Well, it probably doesn’t have any relation, but I heard it while in Wisconsin and I actually woke up early one morning with that chorus running a loop through my head.  I will admit it’s a catchy hook from the short-lived group assembled by former Genesis guitarist Steve Hackett and Asia guitarist Steve Howe, but when that kind of thing happens at four in the morning it’s bloody annoying.  Anyway, that is how it ended up here in this post.

The anticipation and the build up to an event, or in this case the visit, are what we thrive on and what excites us as dates draw near.  It’s the leaving-part that is usually what we dread.  When we left her house that Monday evening for the final time after three full days of being together I felt like Will Farrell when he was in the telephone booth in the movie “Anchorman” – I felt like I was “in a glass case full of emotion!”  It was hard to put anything into words at that exact moment, and I couldn’t.  I just couldn’t muster anything.  I had to just give her a big hug because I was too choked up to say anything. 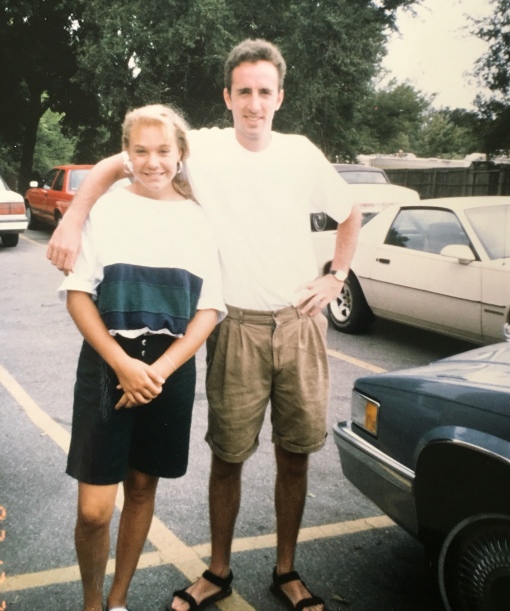 My sister and I probably early 90’s; my first car (and hers) – the light tan ’84 Camaro is in the background

“When the heart rules the mind, one look and love is blind.”

Truly, if my sister and I were to meet as strangers there’s probably very little chance we’d be great friends.  We’re just different.  We’re eight years apart in age.  We don’t talk politics but I’m guessing we differ on many opinions in that arena.  Growing up she was naturally more rebellious and care-free.  I’m more “by-the-book,” less adventurous, and naturally more closed off and introverted.  But because of who she is I love her like she’s my perfect twin, and I’m a better person because of it.

If you ask her, I was “the perfect child” growing up, though I was far from perfect.  I made dumb decisions (anyone remember when I called the high school pretending to be my dad to say I was sick so I could go to a party on “Senior skip day”?  Yeah, that was a good idea).  I sinned like we all have and do.  There were lies and groundings and bad grades and more lies and more groundings, but for the most part there was nothing major that rocked my parents’ world.   My sister, on the other hand, was set at a different speed and temperament than me.  She didn’t just push the boundaries.  Sometimes she just ran through them at full speed and waved at my parents as she flew by.  It was impossible for her to “be more like your brother,” because that’s not who she is or who she was made to be.  I’m sure there was some resentment through the years because of it too. 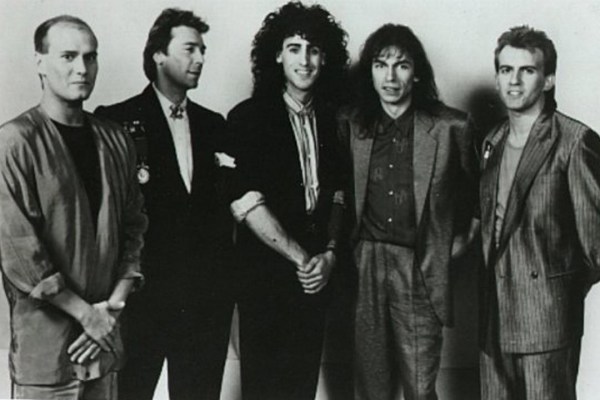 The decidedly bland music video features a stage performance by the band.  I will say they are a nicely dressed bunch, but I always wondered about the medal on guitarist Steve Hackett’s jacket, (wearing it above – second from the left), so I went straight to the source, and here is my very brief “Twitterview” with Steve Hackett:

@kylekerwin It had no significance… Was just decoration.

There you go.  Look how much more informed I just made you about a little known video from a short-lived group!  And you’re welcome.

“Seasons will change.  You must move on.  Follow your dreams.”

My sister had to go through a lot to get to where she is today.  Some of “the bad stuff” I don’t even know about to this day, but I get a sense of it from time to time by things that she or my parents say.  She’s lived in six different states and three different time zones in her life.    She’s endured pain and rejection and unrealistic expectations, but she’s made it in this world and she made it her way.  She really seems to be in a good place today with a job she was made for, a cool, wood-chopping beast of a husband, and a rockin’ one year old that won’t quit smiling.

“When the heart rules the mind.  One look and love is blind.”

I will always look at my little sister and be blind to any shortcomings or faults she has or even thinks she has.  We should all really be more blind and more forgetful sometimes.  It can be a hard thing to do, but I think it would produce less resentment and less judgment.  I’ve never heard one person say ‘I wish I was more judgmental’ or ‘I wish I resented him more than I do.’

I’ll finish this post by saying that I’m very proud of my little sister.  I love her, and I can’t wait to see where the next guitar riff of life leads her.

One of my favorites of my sister and I circa 1980-something in Seminole, OK

Like Loading...
This entry was posted in Uncategorized and tagged GTR, siblings, Steve Hackett, Steve Howe, When the Heart Rules the Mind. Bookmark the permalink.