I just watched “The Breakfast Club” again last night – the whole thing… on DVD (30th Anniversary Edition)… in one sitting.  I know I haven’t watched the whole unedited version since the 80’s.  I’ve seen bits and pieces on cable tv numerous times through the years, and  I’ve written about the movie before on this site, because it was the first R-rated movie I ever snuck into as a 13 year-old growing up in Norman, Oklahoma.  Plus, the theme song by Scottish rock band Simple Minds remains one of my all-time favorite songs.

I also used “The Breakfast Club” last summer when I graduated from my three-year graduate school of banking course in Boulder, CO.  We were divided into five and six man fictional banks during our last two-week session in July.  We had to come up with a bank name and create a presentation for the last day of class.  I sold my younger associates on the idea of calling our fictional bank “The Banker’s Club” and then shooting a fictional movie trailer.  I edited, produced, and acted in this fictional trailer.  We changed the scenes we shot our movie trailer to reflect “banker jargon.”  The acting was terrible, but I used the Simple Minds song as the music bed, and in my opinion, it ended up being one of the best presentations on our final day.  If Youtube and Vimeo would stop with all of the copyright infringement issues with my use of the Simple Minds song, I could post the video here.  But alas, you’ll just have to settle for one of our photos.

(My fictional bank – “The Banker’s Club”)

Anyway, like I mentioned earlier, I watched the movie last night, but I watched it with my 19 year old daughter who had never seen it before.  At first, she was a little amused at the dialogue saying that she didn’t think teens really spoke like that (to her point, Bender is very well-spoken for someone classified as a “stoner”).  But, in the end, she liked it and gave it her seal of approval thus validating the greatness of this John Hughes masterpiece in the Gen Z class as well.

Five stereotypical high-schoolers isolated for an entire Saturday with no electronics (ok, there was a stereo system involved I guess), no phones, and no physical activity (sans Bender’s basketball scene, and the running down the hallways).  Man, sounds eerily similar to what we’re practicing right now.  Stay home.  Stay in small groups or just stay completely isolated.

I’ve read from numerous Gen Xers that our generation was built for this!  We were the first generation left at home after school alone while our parents worked.  After school programs were in their infancy and parents had no choice but just to leave their kids at home to fend for themselves.  We were left to our own vices and to entertain ourselves.  Fueled by the early days of MTV, our landline phones, whatever food we could find in our pantry, and our own imagination, we were the “latchkey” generation.

Because I played basketball and had practice after school the majority of my school life I wasn’t home alone too much after school by myself, but there were times during offseason months that I fell into the latchkey kid bucket as well.  I had a pretty good imagination and I’ve also written on here before about my fictional top 10 video countdown show that I created in my head to kill some of that after-school alone time.

“Eighties, by day we run by night we dance, we do”

So a shoutout to all my Gen Xers out there that remember what it was like to be in isolation after school at your home!  And in honor of our totally awesome generation, here is a song about the 80’s that was actually released in the 80’s.  The English punk band Killing Joke put out this classic in 1984 entitled “Eighties.”

The song was featured in a party scene in the movie “Weird Science” and has been used sparingly through the years.  The song is also famous for having a similar riff as the 1992 Nirvana hit “Come As You Are.”  Just take a listen and it’s quite apparent that Nirvana’s song just uses a slowed down version of the Killing Joke riff.  It’s been said that Killing Joke was pissed off about it, but after Cobain’s death in 1994 any lawsuit or potential monetary ramifications seemed to disappear as well.  Interestingly enough, former Nirvana drummer and current Foo Fighters lead singer Dave Grohl became friends with the band and played drums on their 2003 album and also covered Killing Joke’s song “Requiem” as well.  Maybe it was Dave’s way of making amends at that time. 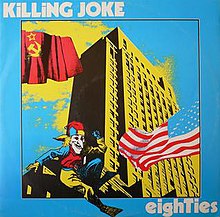 Probably best known for their song “Love Like Blood,” here is Killing Joke and “Eighties”…

Thanks for reading, practice social distancing, and together we will get through this… except separated and isolated as much as possible.  And while you’re isolated, if you’re completely bored then feel free to write me a (much less than) 1000 word essay telling me who you think you are.