“And nothing gets me down” – Van Halen

When I moved to Norman, Oklahoma in the summer of 1984 I didn’t know one person.  I was going into the 8th grade, and my mom and dad had just bought a house on Riverside Drive that backed up to Highway 9.  I had a neighbor the same age as me.  His name was Greg and we became friends over a love of sports.  Greg eventually became a pretty good golfer and I like to think it’s because of the hours we spent with pitching wedges in hand trying to avoid windows and cars around the neighborhood.  The Cubbage’s basketball post across the street was a hole, somebody’s tree in their front yard was a hole, a tree in Greg’s backyard was another.  We made some nice divots in our neighbor’s lawns in those days.

The first day of 8th grade, amongst the throng of 6th, 7th, 8th graders, greasy lockers, and blue carpet at Whittier Middle School, I met a guy who would become one of my very best friends.  His name was Barry and he happened to be a ball boy for the Oklahoma Sooner basketball team where my dad was now coaching.  He loved rock music particularly Van Halen, and other hair metal bands of the day like Def Leppard and Motley Crue.  He thought rap music was “a fad,” had posters of Samantha Fox hanging on his bedroom walls, and insisted that the best pro sports teams were the L.A. Dodgers and Lakers.  He lived with his younger brother Scott and his mom, an elementary school teacher, on a house on Kingsbury Drive across town.  Though he’d spent his early years in California (thus the explanation for his affinity with the Dodgers and Lakers), the whole family now bled the crimson and cream of the Oklahoma University Sooners after years of living in Norman.  They were very good friends (practically family) with former OU place kicker Uwe von Schamann (who had lived with them for a while), and in 1984 was beginning his last season with the Miami Dolphins.  Uwe made the most iconic kick in Sooner lore when his right foot sent a football through the uprights as time expired to beat the legendary Woody Hayes and Ohio State University in a battle of collegiate football powers in 1977. Barry, almost seven at the time, drew a picture of that historic kick and it hung proudly on the wall in the hallway of their home.

He also, like every other OU basketball fan, loved Wayman Tisdale.  The late, great, smiling giant with the deadly turnaround lefthanded jumper had taken the state by storm and we all wanted to wear the #23 of Wayman Tisdale (not “the other” #23 of a then college player in North Carolina named Michael Jordan).  During his ball boy days Barry was also a fan of the OU cheerleaders and pom squad that featured OU basketball coach Billy Tubbs’ daughter, Taylor Tubbs.  There is an iconic photo somewhere in his mom’s collection of Barry at halftime of one of those OU basketball games, bended down on one knee at the free throw line, with one of those wide floor brooms used to sweep basketball floors in the other hand just watching the poms perform intently, oblivious to the fact that he was the only other person on the floor besides them.

As a responsible 8th grader (is that possible?) young master Barry was in charge of the music every morning before school started at Whittier.  It’s one of my earliest memories I have with him.  There was a tape deck in the school’s main office, and Barry would go and insert a tape into the player and push play about 10 or 15 minutes before class was to begin.  The music would come out over the speaker system and that would signal to the students that class was getting ready to begin for the day.  It was always some sort of classical music probably intended to get our young, pubescent minds into a learning mood.  I think we always wanted to just once put a Van Halen or a Prince tape in there.  A more rebellious 12 or 13-year-old probably would have, but like I said Barry was responsible.

The above underground Whittier Middle School and the famous berm that students were not allowed on.

“You got it tough.  I’ve seen the toughest around.”

Whittier was an “underground” middle school, and inside it was an open floor plan meaning the class rooms were only separated by petitions and chalkboards.  It was a unique school and eighth grade was the only year I would attend there because 9th and 10th grade were at a Mid-High Schools (Norman had two – West, where we would both attend, and Central).  While the music played Barry and I would make our rounds.  We would look to see if we could locate his little brother Scotty (a lowly lowly 6th grader) and torment him in some way, or we would discuss whatever relevant news the day held – OU sports was always a big topic,  Bird/Magic – who’s better?, disputes still linger, movies, girls, what sport were we going to dominate during recess – basketball, football, or six square?  We did dominate at six square though, and don’t confuse six square with the simplistic, juvenile little brother known as four square.  Fellow classmate Myles Bumgarner was a legendary six square player in my memory as well.

Imagine these squares being larger and out on the Whittier blacktop.  Insert a red rubber bouncy ball (think dodgeball) and you had yourself a recess six square game

We were both athletes.  When I met Barry he could play every sport really well.  We spent hours in the street playing two on two or three on three touch football.  We spent even more time in his driveway playing on a basketball hoop perched atop a wooden post.  There were times you could pass the ball to yourself using the pitch of the roof over the garage and shoot your imitation Wayman Tisdale turnaround jumper.  We’d also take batting practice in the street in front of his house to work on our baseball swings.  We’d toss tennis balls to each other seeing if we could launch them back over the house and into the backyard with each mighty swing. 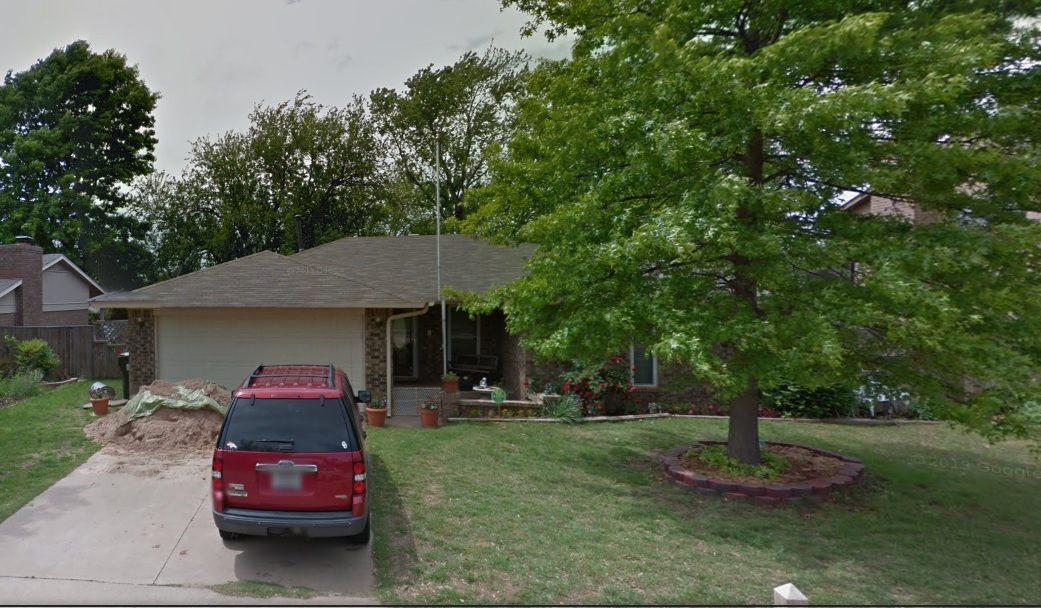 The Blanton’s house on Kingsbury Drive minus the wooden pole but still featuring the tree that could block your shot if you were too far out.

We spent a lot of days on the Westwood Golf Course needling each other over two foot putts.  Nights and weekends at one of our houses included playing video games, making nachos in the microwave, discussing girls, renting movies (on VHS), and staying up late to watch them.  For some reason, to this day, the 1982 campy action-comedy “They Call Me Bruce” still stands out in my mind as one of our favorites and probably way funnier back then than if I watched it today.  We spent our summers mowing lawns for extra money, playing sports, and we even wrote to each other (on pencil and paper with envelopes and stamps!) when we would go on vacation with our families.

The mighty Whittier Warrior basketball team of 1984-85 led by coach Jerry Privett (Barry, who shot free throws like former OU basketball player Tim McAlister is wearing 24 and I’m to the right wearing 10.  My neighbor Greg is in the front wearing 5 and legendary six square player Myles is in on the top row furthest to  the right)

There are people in your life that come and go as quickly as the flame of a match, and then there are those people that have staying power whether you see them often or not.  There are times in your life where moments are made without knowing it and memories are born without much recognition.  Barry and I made a lot of memories those years from 8th grade through graduation from Norman High School in May of 1989 – many of which I’m sure I will cover at a different time on here.  We don’t make as many memories anymore as we used to, but I know I can pick up the phone and call or text him anytime for anything and nothing has changed.  He will be there for me for anything and I will do the same for him.  That’s what friends do, and that’s why I wanted to take some time on this day in particular, because it was on this particular day in 1970 that Barry “Boom Boom” Blanton was born, and I’m so thankful for that.  I’m thankful for his friendship and I’m thankful for all of the opportunities we’ve had to make memories over the 32 years I’ve known him.

On this occasion, in keeping with the theme of this blog, I have to go with a song we both loved from an album named after the year we met – “1984.”  This song was actually released in late 1983 before we had even actually met, but kindred spirits eventually seek one another out don’t they.  This song peaked at the #1 spot on the charts in March of 1984 and is one of the iconic tunes from the decade of the 80’s.  It is the only #1 hit from the band known simply by the brothers’ Alex and Eddie’s last name – Van Halen.  It was almost the end of the first David Lee Roth era, but in 1984 this band was at the height of its’ popularity.  It’s an awesome song from an awesome band.  The year was 1984, the album was 1984, and this one is dedicated to my brother, Barry Blanton.

“Go ahead and jump!”

The awesome OU ballboy photo was uncovered and sent to me by Barry.  It wasn’t the free throw line where he knelt, but a whole lot closer!  Here it is… 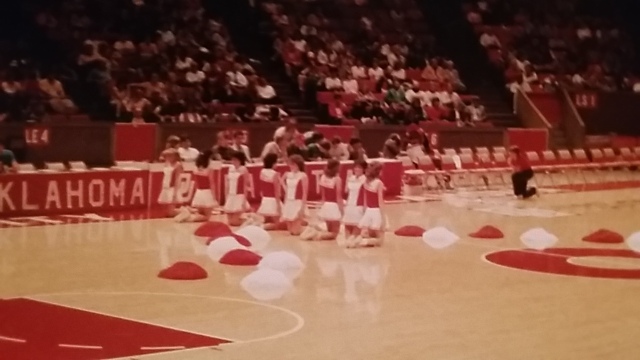